Skip to main content
Conscience and Its Problems: An Introduction to Casuistry
By: Kenneth Kirk
Stock No: WW255787 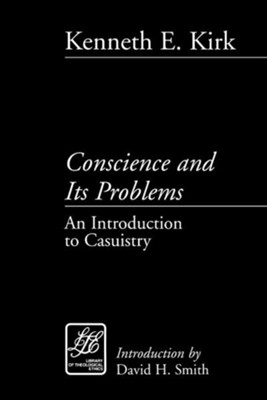 Conscience and Its Problems: An Introduction to Casuistry

▼▲
Originally published in 1927, this book stands as a pertinent, original, and insightful contribution to contemporary ethics. Kirk addresses the rationale for moral thought, the role of the church as a moral community, and the handling of problematic moral situations through a case-by case analysis (an approach known as casuistry). What is the church to make of Jack Kevorkian? Kirk provides a framework for responding to such issues. The book has an introduction by David H. Smith. Contents Include: General Editors' Introduction Introduction by David H. Smith Author's Notes to 1948 and 1936 Edition Principal Abbreviations Introductory Part One: Conscience and Casuistry - Moral Judgements Moral Judgements and Moral Taste Conscience and Emotions Intuitions Indifferent Acts "I Ought" and "I May" Personification of Conscience Loyalty - Conscience and the Community Loyalty Relativity of Moral Law Custom and Re-Interpretation The Church of England What Loyalty Involves Loyalty and Casuistry Casuistry - Cases of Conscience The Equipment of the Casuist The Misuse of Casuistry Judaism Stoicism Casuistry and Christianity - Casuistry and the Gospels St. Paul The First Experiments The Abbot Joseph and St. Augustine The Middle Ages Post-Reformation Casuistry Part II - Problems of Conscience- Error - Conscientious Nonconformity Discipline, Suasion and Force Liberty of the Christian Limitation of Liberty Refusal of Communion and Refusal of Absolution Doubt - The Doubts of Anglicans The Benefit of the Doubt Probabilism and its Safeguards Fasting Comunion Confession Clerical Celibacy The Papal Claims Birth Control Betting and Gambling Perplexity -Duty and Desire Conflicts of Evils Problems of Truthfulness Lies, Pardonable and Unpardonable General Strikes The Ethics of Compromise Commercial Honesty Conclusion Additional Notes: Definition of Conscience Two Modern Views of Casuistry Probable Opinions Limitations of the Probabilism Doubt and Perplexity A Roman Catholic Moralist on Lying Objective and Subjective Necessity for Salvation Index of Authors and Subjects

This book, originally published in 1927, has proven to be one of the most important and influential books in the field of ethics in the twentieth century. It remains a pertinent, original, and insightful work--a landmark statement of modern casuistry.

The Library of Theological Ethics series focuses on what it means to think theologically and ethically. It presents a selection of important and otherwise unavailable texts in easily accessible form. Volumes in this series will enable sustained dialogue with predecessors though reflection on classic works in the field.

▼▲
Kenneth E. Kirk was the Bishop of Oxford in the Church of England from 1937-1954. He served as a chaplain for the British Army during World War I. An influential moral theologian, he published several works, including Some Principles of Moral Theology.

▼▲
I'm the author/artist and I want to review Conscience and Its Problems: An Introduction to Casuistry.
Back