Skip to main content
CYBER WEEK SALE! Spot great deals up to 88% off. >
The Conquerors: Roosevelt, Truman and the Destruction of Hitler's Germany, 1941-1945 - eBook
By: Michael Beschloss
Stock No: WW8904EB 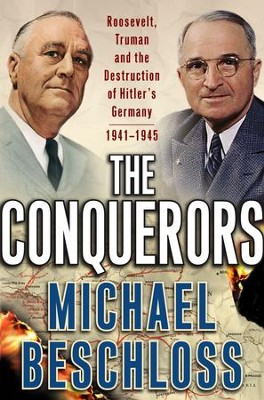 The Conquerors: Roosevelt, Truman and the Destruction of Hitler's Germany, 1941-1945 - eBook

▼▲
A New York Times bestseller, The Conquerors reveals how Franklin Roosevelt's and Harry Truman's private struggles with their aides and Winston Churchill and Joseph Stalin affected the unfolding of the Holocaust and the fate of vanquished Nazi Germany.

With monumental fairness and balance, The Conquerors shows how Roosevelt privately refused desperate pleas to speak out directly against the Holocaust, to save Jewish refugees and to explore the possible bombing of Auschwitz to stop the killing. The book also shows FDR's fierce will to ensure that Germany would never threaten the world again. Near the end of World War II, he abruptly endorsed the secret plan of his friend, Treasury Secretary Henry Morgenthau, to reduce the Germans to a primitive existence -- despite Churchill's fear that crushing postwar Germany would let the Soviets conquer the continent. The book finally shows how, after FDR's death, President Truman rebelled against Roosevelt's tough approach and adopted the Marshall Plan and other more conciliatory policies that culminated in today's democratic, united Europe.

▼▲
Michael Beschloss has been called "the nation's leading Presidential historian" by Newsweek. He has written eight books on American Presidents and is NBC News Presidential Historian, as well as contributor to PBS's The NewsHour with Jim Lehrer. He lives in Washington, D.C., with his wife and two sons.

▼▲
The New York Times Book Review Vigorously written....This is history as it was spoken at the time, and there is not a dull page.
The Wall Street Journal Opinion Journal, "Editor's Choice" A gripping narrative of the struggles at the end of World War II...to ensure that Nazi Germany would never be allowed to repeat its horrific acts.
Richard Bernstein The New York Times The main lesson of Mr. Beschloss's fine study is that what happens after a war is as important as what happens on the battlefield.
Jim Hoagland The Washington Post An incomparable account.

▼▲
I'm the author/artist and I want to review The Conquerors: Roosevelt, Truman and the Destruction of Hitler's Germany, 1941-1945 - eBook.
Back
Back