EARLY CHRISTMAS SALE: Shop over 900 items up to 85% off through 9/29 >
Connecticut Yankees at Gettysburg - eBook
Edited By: Walter L. Powell
By: Charles P. Hamblen 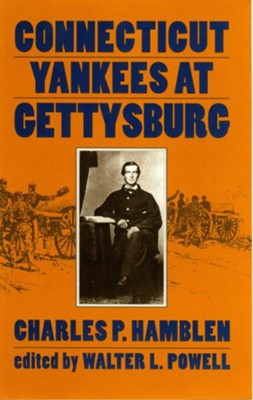 ▼▲
Charles P. Hamblen’s posthumous text provides the first account in more than 25 years of soldiers from the Nutmeg State and their role during the Battle of Gettysburg.Dramatic narrative is interwoven with excerpts from the letters and diaries of Connecticut’s fighting ranks to produce an extended overview of the battle that will appeal to Civil War buffs, first-time students of Gettysburg, and those interested in Connecticut history.  Special attention is given to the 17th Connecticut regiment’s distinguished part in the conflict at Barlow’s Knoll and East Cemetery Hill, including the little-known action at the Josiah Benner Farm on July 1, 1863.Supplemented with numerous photographs of the participants, many of which have never before been published, and detailed maps pinpointing the position of Connecticut’s five regiments during the battle, Connecticut Yankees at Gettysburg offers an original retelling of the greatest battle of the Civil War.

▼▲
I'm the author/artist and I want to review Connecticut Yankees at Gettysburg - eBook.
Back
×
Back
×