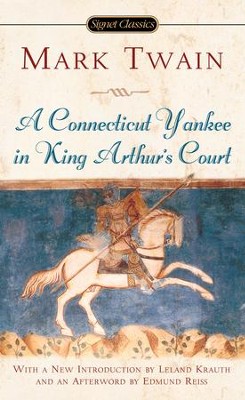 ▼▲
Cracked on the head by a crowbar in nineteenth- century Connecticut, Hank Morgan wakes to find himself in King Arthur's England, facing a world whose idyllic surface masks fear, injustice and ignorance. In this acclaimed tour de force, Mark Twain moves from broad comedy to biting social satire, from the pure joy of wild high jinks to deeply probing insights into the nature of man. Considered by H.L. Mencken to be "the most bitter critic of American platitude and delusion...that ever lived," Twain enchants readers even as the grim truths of his Camelot strike disturbingly contemporary notes.

Cracked on the head by a crowbar in nineteenth-century Connecticut, Hank Morgan wakes to find himself in King Arthur’s England. After using his knoweldge of an upcoming solar eclipse to escape a death sentence, Hank must then navigate his way through a medieval world whose idyllic surface masks fear, injustice, and ignorance.

Considered by H. L. Mencken to be "the most bitter critic of American platitude and delusion&hellip;that ever lived," Twain enchants readers with a Camelot that strikes disturbingly contemporary notes in this acclaimed tour de force that encompasses both the pure joy of wild high jinks and deeply probing insights into the nature of man.

▼▲
Mark Twain was born Samuel Clemens in Florida, Missouri, in 1835, and died at Redding, Connecticut in 1910. In his person and in his pursuits, he was a man of extraordinary contrasts. Although he left school at twelve when his father died, he was eventually awarded honorary degrees from Yale University, the University of Missouri, and Oxford University. His career encompassed such varied occupations as printer, Mississippi riverboat pilot, journalist, travel writer, and publisher. He made fortunes from his writing but toward the end of his life he had to resort to lecture tours to pay his debts. He was hot-tempered, profane, and sentimental—and also pessimistic, cynical, and tortured by self-doubt. His nostalgia for the past helped produce some of his best books. He lives in American letters as a great artist, the writer whom William Dean Howells called "the Lincoln of our literature."

▼▲
"Twain is the funniest literary American writer. . . . [I]t must have been a great pleasure to be him."
--George Saunders

▼▲
I'm the author/artist and I want to review A Connecticut Yankee in King Arthur's Court - eBook.
Back
×
Back
×