CHRISTMAS MEGA SALE: Save up to 85% off through 10/20 >
Confessions of St. Augustine
By: Saint Augustine 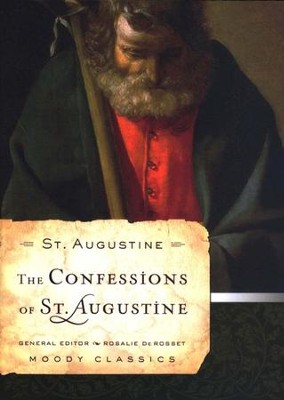 ▼▲
Underscoring the pivotal role that classic literature plays in the shaping of our lives, Moody Press has introduced Moody Classic Series, celebrating Christian writing which has stood the test of time.
St. Augustine's Confessions is one of the classics in this series, featured here with fine art cover design; edited by Rosalie DeRosset. 304 pages; with notes.

St. Augustine grates hard against "the anatomy of evil" while dealing succinctly and honestly with his own proneness toward sin. From his infatuation with its initial beauty to the discounting of his previously wasted life, Augustine leaves little to the imagination regarding his need to be saved from himself.

Most of Augustine's Confessions are spent in a nearly catastrophe tug of war. From insult and injury to passion, lost love, and the arts--this work leads through and beyond a world where God's timing is absolutely perfect. Nothing has really changed since then. Sin is still sin--and God is still God.

▼▲
AUGUSTINE OF HIPPO (354-430) was one of the foremost philosopher-theologians of early Christianity and the leading figure in the church of North Africa. He became bishop of Hippo in 396 and held that position until his death. Before becoming a Christian, Augustine lived a very secular life. His mother Monica prayed for him diligently and at age 32, during a trip to Milan, Augustine heard the preaching of St. Ambrose, was convicted by the Holy Spirit, and became a Christian. His numerous written works, the most important of which are his Confessions and City of God, shaped the practice of biblical exegesis and helped lay the foundation for much of medieval and modern Christian thought.

▼▲
I'm the author/artist and I want to review Confessions of St. Augustine.
Back
×
Back
×