Complete Live and Learn and Pass It On: People Ages 5 to 95 Share What They've Discovered about Life, Love, and Other Good Stuff - eBook
By: H. Jackson Brown Jr. 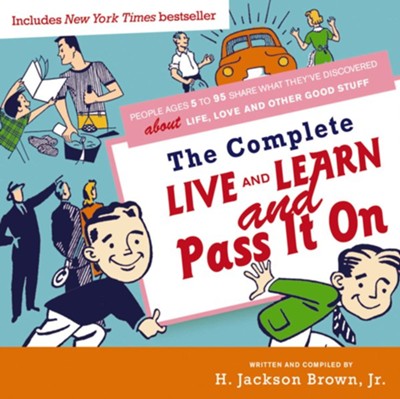 Complete Live and Learn and Pass It On: People Ages 5 to 95 Share What They've Discovered about Life, Love, and Other Good Stuff - eBook

On the morning of H. Jackson Brown's fifty-first birthday, he jotted down a few of the important things more than half a century of living had taught him. He enjoyed the exercise so much that he made it a weekly project. Later, a friend said he would like to try. Other joined in. Contributions from kindergarten kids, high school students, young married couples, and senior citizens made Brown realize that wisdom knows no age and that truth is truth no matter where you find it.

What ultimately comes through in the contributions to Live and Learn and Pass It On is a sense of cheerfulness, resolve, and the importance of keeping things in perspective. A forty-two-year-old father wrote, "I've learned that a shoeshine box made by my eight-year-old son at Vacation Bible School is my most prized possession." "That's as powerful a statement about priorities and what makes life worth living as you will ever read," says Brown.

This edition contains all three volumes of the book that spent more than 28 weeks on the New York Times bestseller list.

A New York Times best-selling author, H. Jackson Brown’s publications are universal in appeal, with more than 30 million copies in print, available in 35 languages. His 33 books inspire readers throughout the world. He lives in Nashville, Tennessee.

▼▲
I'm the author/artist and I want to review Complete Live and Learn and Pass It On: People Ages 5 to 95 Share What They've Discovered about Life, Love, and Other Good Stuff - eBook.
Back
×
Back
×