EARLY CHRISTMAS SALE: Shop over 900 items up to 85% off through 9/29 >
The Civil War: The complete text of the bestselling narrative history of the Civil War-based on the celebrated PBS television series - eBook
By: Geoffrey C. Ward, Ric Burns, Ken Burns 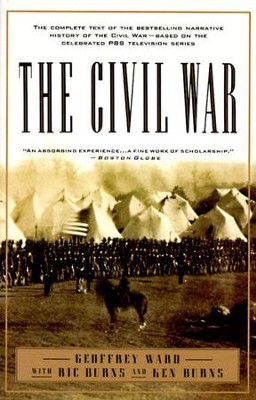 The Civil War: The complete text of the bestselling narrative history of the Civil War-based on the celebrated PBS television series - eBook

"The Civil War defined us as what we are and it opened us to being what we became, good and bad things.... It was the crossroads of our being, and it was a hell of a crossroads: the suffering, the enormous tragedy of the whole thing."- Shelby Foote, from The Civil War

When the illustrated edition of The Civil War was first published, The New York Time hailed it as "a treasure for the eye and mind." Now Geoffrey Ward's magisterial work of history is available in a text-only edition that interweaves the author's narrative with the voices of the men and women who lived through the cataclysmic trial of our nationhood: not just Abraham Lincoln, Frederick Douglass, and Robert E. Lee, but genteel Southern ladies and escaped slaves, cavalry officers and common foot soldiers who fought in Yankee blue and Rebel gray.

The Civil War also includes essays by our most distinguished historians of the era: Don E. Fehrenbacher, on the war's origins; Barbara J. Fields, on the freeing of the slaves; Shelby Foote, on the war's soldiers and commanders; James M. McPherson, on the political dimensions of the struggle; and C. Vann Woodward, assessing the America that emerged from the war's ashes.

Geoffrey C. Ward is the author Before the Trumpet: The Young Franklin Roosevelt and A First-Class Temperament: The Emergence of Franklin Roosevelt, which won the National Book Critics Circle Award for biography. A former editor of American Heritage, Ward has also written a number of documentary films for public television, including The Civil War, Huey Long, The West, and Thomas Hart Benton (all with Florentine Films). He is a frequent contributor to Audubon, MHQ, Smithsonian, and other magazines.

Ken Burns, founder of Florentine Films, is one of the most celebrated documentary filmmakers working today.  He has produced and directed a number of award-winning films, including Huey Long, Brooklyn Bridge, The Statue of Liberty, The Shakers, The Congress, and Thomas Hart Benton. He was a producer, director, cinematographer, and co-writer of the PBS series The Civil War.

Ric Burns is a producer and writer of The Civil War and was educated at Columbia and Cambridge universities.  He is currently producing and directing a documentary history of Coney Island.

▼▲
"An absorbing experience... A fine work of scholarship."- Boston Globe

"Succeeds in evoking both the grandeur of the war and its basic humanity."- Chicago Tribune

▼▲
I'm the author/artist and I want to review The Civil War: The complete text of the bestselling narrative history of the Civil War-based on the celebrated PBS television series - eBook.
Back
×
Back
×