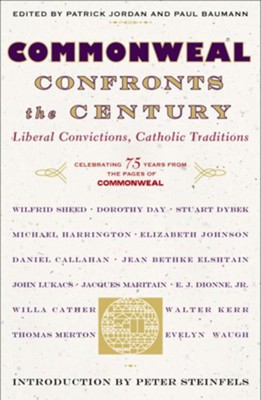 ▼▲
(PUBTouchstone)Commemorating 75 years! A leading forum for the discussion of political and literary issues in Catholic circles, Commonweal has attracted a number of major voices: Waugh, Niebuhr, Merton, Cather, Day, Arendt, Maritain, Coles. Reread these classic essays to understand the turmoils of the century. 400 pages, softcover.

▼▲
THE BEST OF THE CATHOLIC INTELLECTUAL TRADITION
For 75 years, Commonweal magazine has sought to bring Catholic faith and modern life -- especially the experience of American freedom and diversity -- into fruitful contact. Now Commonweal Confronts the Century not only marks the anniversary of this distinguished journal, it also traces the ways in which the Catholic intellectual tradition has struggled with modernity, democratic institutions, and American culture while remaining faithful to its heritage.
Collected here are many of the most provocative essays the journal has published by a number of the century's most distinguished writers and thinkers. Together they confront controversial issues of continuing relevance within both the Catholic Church and American society in general. In the pages of Commonweal, liberal Catholics have carried on a dialogue about American culture and politics, the arts, religious pluralism, domestic upheaval, war and peace, liberal freedoms, and new moral and sexual sensibilities. Here is a feast of argument, observations, and good writing that will appeal to both the religiously informed and the intellectually curious. Highlights of Commonweal Confronts the Century include:
Dorothy Day on poverty
Graham Greene on his religious conversion
Thomas Merton on nuclear war
Jean Bethke Elshtain on gay marriage
Daniel Callahan on health care

▼▲
Peter Steinfels, former co-director of the Fordham University Center on Religion and Culture, is a university professor at Fordham. He was religion columnist for The New York Times and editor of Commonweal. Steinfels is the author of A People Adrift: The Crisis of the Roman Catholic Church in America (Simon & Schuster, 2003). He lives in New York City.

▼▲
Jack Miles author of God: A Biography For a distillation of what the Catholic identity has meant over the last 75 years to American intellectual life, Commonweal Confronts the Century will not soon be topped.
Garry Wills Liberal Catholicism could hardly have existed but for Commonweal, as this eloquent collection demonstrates.

▼▲
I'm the author/artist and I want to review Commonweal Confronts the Century.
Back