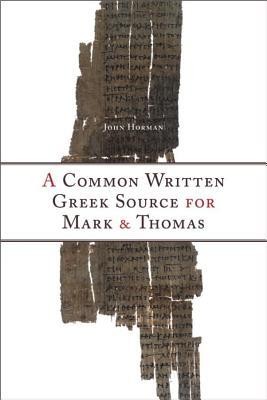 ▼▲
This book uncovers an early collection of sayings, called N, that are ascribed to Jesus and are similar to those found in the Gospel of Thomas and in Q, a document believed to be a common source, with Mark, for Matthew and Luke. In the process, the book sheds light on the literary methods of Mark and Thomas. A literary comparison of the texts of the sayings of Jesus that appear in both Mark and Thomas shows that each adapted an earlier collection for his own purpose. Neither Mark nor Thomas consistently gives the original or earliest form of the shared sayings; hence, Horman states, each used and adapted an earlier source. Close verbal parallels between the versions in Mark and Thomas show that the source was written in Greek. Hormans conclusion is that this common source is N.

This proposal is new, and has implications for life of Jesus research. Previous research on sayings attributed to Jesus has treated Thomas in one of two ways: either as an independent stream of Jesus sayings written without knowledge of the New Testament Gospels and or as a later piece of pseudo-Scripture that uses the New Testament as source. This book rejects both views.

▼▲
I'm the author/artist and I want to review Common Written Greek Source for Mark and Thomas.
Back
×