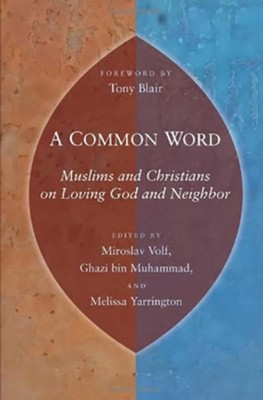 A Common Word: Muslims and Christians on Loving God and Neighbor

▼▲
In 2007, 138 Muslim world leaders issued an open letter in The New York Times to their prominent Christian counterparts, inviting cooperation as a step toward peace. This remarkable volume features that original letter, the collaborative Christian response "Loving God and Neighbor Together", expanded commentary and dialogue addressing critical questions about these two momentous documents. This significant book offers a brave and encouraging move toward harmony between two world religions that so often seem to be at odds.

▼▲
A Common Word Between Us and You, a letter written by a group of Muslims in 2007 to Christian leaders, is the basis for this look at relations between the worlds two largest religions. Originally signed by 138 Muslim scholars and intellectuals, the letter takes its title from a passage in the Quran and presumes a shared belief by Muslims and Christians in the oneness of God and a common commitment to love God and neighbor. Though it sought to spread harmony, A Common Word and the subsequent Christian response have excited suspicion and controversy. For example, some have questioned why the authors of the response felt impelled to apologize to Muslims for the crusades and excesses of the war on terror.  This volume contains the text of the document and names of the signatories, plus reflections by the chief authors, followed by the Christian response, a series of Muslim and Christian perspectives, and frequently asked questions about the initiative. Those who can approach such material dispassionately will most appreciate this significant effort at interfaith understanding. (Dec.) Copyright 2009 Reed Business Information.

▼▲
I'm the author/artist and I want to review A Common Word: Muslims and Christians on Loving God and Neighbor.
Back
Back