Skip to main content
NEW CYBER DEALS Save up to 90% thru 12/12  shop now >
Common Sense for the Common Good: Libertarianism As the End of Two-Party Tyranny - eBook
By: Gary E. Johnson
Stock No: WW88274EB 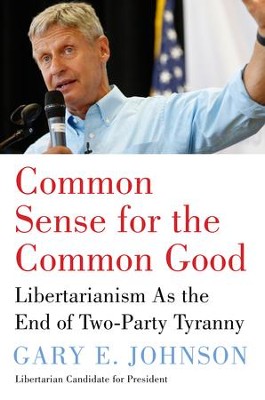 Common Sense for the Common Good: Libertarianism As the End of Two-Party Tyranny - eBook

With the contentious 2016 U.S. presidential election cycle spinning into its final phases, only one thing seems clear: the American people are less than satisfied with the two major political parties’ candidates.

Gary Johnson, Libertarian Party candidate for president and former two-term Republican governor of New Mexico, stakes his claim to the very center of the political spectrum. His new e-pamphlet Common Sense for the Common Good offers his approach to how a member of a third party, acting as the Chief Arbiter of the U.S., can restore sanity and functionality to the highest office in the land.

Johnson succinctly shares his views on how the two-party system is dysfunctional. How its binary approach to issues doesn’t reflect the multiplicity of viewpoints inherent in our contemporary society. How the nasty divisiveness that rules public and private discourse is endemic to this flawed and outdated system.

He offers his alternative to the dualistic electoral process—and why he believes the on/off, black/white, I’m right/you’re wrong thinking—cripples our minds and grinds government to a halt.

He takes on the challenge of explaining Libertarianism as a philosophy that espouses:

This e-pamphlet sets the stage for Johnson’s forthcoming book, which is part memoir and part manifesto. In just 50 pages he describes his own personal and political evolution. He firmly believes that, if the rigged electoral polling and debate processes were fair, the vast majority of Americans would come to understand that their beliefs and values are best represented by the Libertarian Party.

Gary Johnson is the 2016 Libertarian Party Presidential nominee. A successful businessman before seeking elected office, Gary Johnson started a door-to-door handyman business to help pay his way through college. Twenty years later, he had grown that business into one of the largest construction companies in New Mexico, with more than 1,000 employees. In 1994, Johnson was elected Governor of New Mexico, running as a Republican in an overwhelmingly Democratic state. Johnson financed his primary election campaign with his own funds, won the nomination, and was elected. He was reelected in 1998.  An avid skier, adventurer and bicyclist, he has scaled the highest peak on each of the seven continents, including Mt. Everest. Governor Johnson has two grown children --  a daughter, Seah, and a son Erik, and recently became a grandfather. He currently resides in a house he built himself in Taos, New Mexico.

▼▲
I'm the author/artist and I want to review Common Sense for the Common Good: Libertarianism As the End of Two-Party Tyranny - eBook.
Back
Back