Skip to main content
CYBER WEEK SALE! Spot great deals up to 88% off. >
Common Objects of Love: Moral Reflection and the Shaping of Community; The 2001 Stob Lectures
By: Oliver O'Donovan
Stock No: WW863491 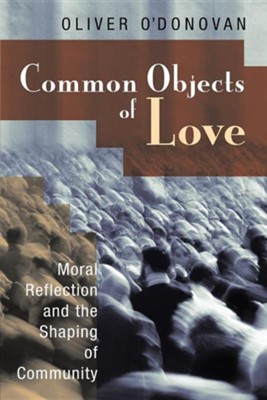 Common Objects of Love: Moral Reflection and the Shaping of Community; The 2001 Stob Lectures

▼▲
In Common Objects of Love Oliver O'Donovan, widely respected as one of today's wisest and most articulate Christian ethicists, takes readers on a journey of thought. Yet this journey, he warns, does not "circle comfortably around its subject like a pleasant afternoon stroll, but sets out for a far country." The purpose of the journey is to trace "what unifies a multitude of human agents into a community of action and experience sustained over time." The book's central theme, which arises out of Augustine's idea that we know only as we love, is that moral reflection, or the identification of objects of love, has effect in organized community. This perspective provides a fruitful resolution to the traditional Aristotelian dichotomy of theoretical and practical reason and directs us as to how we may think "from truths of Christian faith to conclusions in Christian action." O'Donovan's interest in this theme lies especially with its political possibilities, as he explores how love is key to the organization and coherence of political society. Beginning with some lighthearted puzzles about teaching ethics, O'Donovan explores a series of related historical and current issues - the iconoclastic controversy of the ninth century, the nature of ethical deliberation, the deleterious role of publicity in late-modern liberal society, and more - and he offers some reflections on the events of September 11, 2001. It is with John of Patmos, finally, that O'Donovan brings his journey of thought to an evangelical conclusion, one that rests on the narrative of the fall and redemption of society and of the vindication of created order in the coming of God's kingdom. Originating as the 2001 Stob Lecturesdelivered at Calvin College and Seminary, Common Objects of Love provides a thought-provoking look at social and political behavior as it is - or should be - informed by Christian love.

▼▲
I'm the author/artist and I want to review Common Objects of Love: Moral Reflection and the Shaping of Community; The 2001 Stob Lectures.
Back