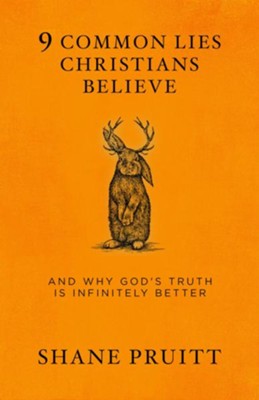 ▼▲
In Nine Common Lies Christians Believe, Shane Pruitt tackles popular one-liners that have wormed their way into our Christian vernacular, including "God gained another angel," "Follow your heart," and "God just wants me to be happy." As Shane reminds us, when we move past religious jargon and the catchphrases of cultural Christianity, we can focus our minds on the Word of God. Because Scripture offers more than one-liners intended to comfort; it offers an invitation to know God Himself.

▼▲
Maybe God isn't who you think He is. Maybe He's much better. Pastor and speaker Shane Pruitt guides readers in identifying the Christian cliches we've all heard that are actually unbiblical lies. He then counters with the truths about God as presented in the Bible, truths that bring encouragement and freedom for our lives.

God won't give you more than you can handle. Really? Pastor and speaker Shane Pruitt shines a light on this and other Christian cliches that upon further inspection are actually unbiblical lies that keep far too many believers stuck in spiritual immaturity.

▼▲
SHANE PRUITT and his wife, Kasi, live in Rockwall, Texas, with their five children. He has been in ministry for over 17 years as a denominational leader, church planter, pastor, and traveling communicator. He currently serves as Director of Evangelism for the Southern Baptists of Texas Convention. He holds a Bachelor's in Biblical Studies, a Master's in History, and a PhD in Clinical Christian Counseling.

He is a popular blogger, and has had articles appear in RELEVANT, Christianity Today, The Christian Post, CrossWalk, Church Leaders, The Baptist Press, FaithIt, HelloChristian, and many others. Shane and his wife were featured as ABC's Nightly News "Persons of the Week" in August 2017 - the story centered around their adoption.

▼▲
"Do you cringe when hearing another Christian clich&eacute;? Are you weary of how unhelpful (and unbiblical) some of our Christian vernacular has become? In this book my friend Shane Pruitt addresses some of the statements that have run amuck in our midst and have inevitably weakened the voice of the church in our culture. I highly recommend you read this book and discuss it with a group of friends."
—Ed Stetzer, Billy Graham distinguished chair at Wheaton College

"Shane’s book will help all of us understand the true character of God in a deeper way and be ready to encourage friends and family who have fallen prey to these common lies."
—Scott Evans, founder and president of Outreach Inc.

"It’s the book we all need to read. It’s the book we need to encourage others to read. It’s the book about lies we have heard and maybe even believed throughout our Christian lives. Shane Pruitt takes the lies and turns them upside down to point us to biblical truth. He writes from the heart of one who loves Scripture but also from the heart of one who has had to endure these lies amid his own heartaches in his family. Thank you, Shane. Nine Common Lies Christians Believe is a gift to all of us."
—Thom Rainer, president and CEO of LifeWay Christian Resources Church Answers, ChurchAnswers.com

"Shane’s book encompasses my two favorite themes: the restorative grace of Jesus Christ and adoption. This book is sure to encourage you!"
—Lisa Harper, speaker and author of The Sacrament of Happy

"The evangelical world has been waiting to hear from a fresh young voice like Shane Pruitt. He has a passion for people and a love for the Lord and is straight as an arrow theologically. Read this new book&hellip;and reap!"
—O. S. Hawkins, president and CEO of GuideStone Financial Resources and best-selling author of The Joshua Code

"Finally! I am so thankful that Shane has addressed these lies so winsomely and pointed us toward the real truth of God’s Word! This book will be a tremendous encouragement to people going through a difficult time, wanting to know God’s Word better, or simply looking to increase their faith. I urge you to read it and share it with everyone you know!"
—Jonathan "JP" Pokluda, teaching pastor at Watermark Community Church, leader of The Porch, and author of Welcome to Adulting

"I’ve been in church my entire life and had no idea that some of the clich&eacute;s that are often regurgitated aren’t at all biblical. In Nine Common Lies Christians Believe, Shane Pruitt articulately lays out a biblically sound doctrine that is both convicting and a breath of fresh air!"
—Lawrence B. Jones III, news contributor for Fox News, CNN, and MSNBC and editor in chief of Campus Reform

"Here’s a clear and compelling antidote to the kind of common clich&eacute;s that so many people uncritically believe. Thanks, Shane, for pointing readers to biblical wisdom, where hope and truth reside!"
—Lee Strobel, New York Times best-selling author of The Case for Christ and The Case for Faith

"Without consistent discipleship, Christians can fall prey to lies they’ve heard regularly in the church. In Nine Common Lies Christians Believe, Shane successfully navigates some of the most common false beliefs told in the church. By speaking the truth in love, he firmly and gracefully provides a much-needed course correction. Every Christian will benefit from reading this book."
—Robby Gallaty, senior pastor at Long Hollow Baptist Church and author of Growing Up and The Forgotten Jesus

"Like Paul Laurence Dunbar’s "We Wear the Mask," Shane Pruitt’s Nine Common Lies Christians Believe allows us to collectively exhale, exposing humanity’s propensity to hide. Unlike Dunbar’s poem, Shane’s prose welcomes us into the land of vulnerability, embraced by a Father who loves us."
—Bryan Loritts, lead pastor at Abundant Life Church and author of Insider Outsider

"Jesus never said that following Him was going to be easy. When Christians reduce faith to pithy statements like the lies Shane breaks down in this book, it doesn’t help—it actually hurts. So stop believing these lies! Let my friend Shane guide and lead you to understanding the heart of God."
—Daniel Im, teaching pastor at The Fellowship, director of church multiplication at LifeWay Christian Resources, podcaster, and author of No Silver Bullets

"In my time in ministry, I can’t tell you how often I’ve heard Christians articulate some version of each of the statements in this book. I’m so glad Shane wrote this book, addressing these lies from a biblical perspective. Shane Pruitt is a voice we need to hear more from."
—Matt Carter, pastor of preaching and vision at The Austin Stone Community Church and author of Steal Away Home


Pruitt, director of evangelism for the Southern Baptists of Texas Convention, challenges readers to question whether what they think they know about God lines up with scripture in this persuasive book. When Pruitt and his wife discovered that their adopted son had severe health challenges due to gangrene, despite their heartache and anger, they felt they had to keep up the appearance of being in control and at peace. Meanwhile, Pruitt discovered that well-meaning members of their congregation’s clich&eacute; comments about being the "good Christian" proved more annoying than helpful. Realizing that many Christians hold unproductive, untrue ideas about the nature of Christianity, he decided to structure the book around nine common lies he believes Christians tell themselves—often to help deal with difficult circumstances.

For instance, God actually does give people more than they can handle, Pruitt suggests, because otherwise, followers would have no need to turn to him in prayer. Also, the phrase "God gained another angel" is false, he writes, citing the difference between "angelic" and a human being, reminding readers that scripture doesn’t say that everyone who dies will spend eternity in heaven. Other false statements he argues Christians believe include "God just wants me to be happy" and "Follow your heart." This is a wonderfully reasoned book that strikes at the core of unhelpful platitudes distorted from Biblical scripture.
—Publishers Weekly

▼▲
I'm the author/artist and I want to review 9 Common Lies Christians Believe: And Why God's Truth Is Infinitely Better.
Back
×
Back
×