BRING CHRISTMAS HOME SALE: Save up to 85% through 11/2 >
Commentary on the Gospel of John: Ancient Christian Texts [ACT]
Edited By: Marco Conti, Joel C. Elowsky
By: Theodore of Mopsuestia 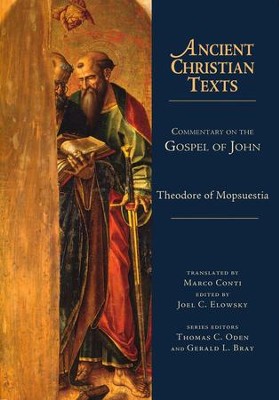 Commentary on the Gospel of John: Ancient Christian Texts [ACT]

▼▲
Born in Antioch circa 350 AD, Theodore served as priest and eventual Bishop of the city of Mopsuestia. A disciple of Diodore of Tarsus (who also mentored John Chrysostom), Theodore became an important tour de force in the Antiochene school of exegesis. As Theodore was a teacher to Nestorious, many of his works were condemned posthumously at the Second Council of Constantinople (the Fifth Ecumenical Council) in 553 AD. Following his condemnation most of his early works were subsequently fragmented, though a complete syriac translation of his commentary on the Gospel of John was produced nevertheless, dating back to 460-465 AD - within 40 years of Theodore's death! While we should remain critical of Theodore's dualistic Christology, especially in light of the later Chalcedonian formula, this translation of Theodore's commentary, now available in English for the first time, remains valuable for contemporary students and lay readers seeking a deeper understanding of the ancient church's view on John's Gospel.

▼▲
Theodore of Mopsuestia, born in Antioch (c. 350) and a disciple of Diodore of Tarsus, serves as one of the most important exemplars of Antiochene exegesis of his generation. Committed to literal, linguistic, grammatical and historical interpretation, he eschewed allegorical explanations that could not be supported from the text, though he was not averse to typological interpretations of Old Testament texts that were supported by the New. Regrettably, Theodore was dragged posthumously into the Nestorian controversy, and his works were condemned by the Three Chapters and the Council of Constantinople in 553. As a result many of his theological and exegetical works were lost or destroyed. The original Greek version of his Commentary on the Gospel of John remains only in fragments. This new English translation is based on an early complete Syriac translation dated A.D. 460-465, within forty years of Theodore?s death in 428. While charges of heterodoxy against Theodore may not be entirely justified, there remains an apparent dualism in his Christology that should be critically viewed in light of the later Chalcedonian formula. With this caution, there still remains much that is valuable for contemporary readers, whether preachers, students or lay people interested in the early church?s understanding of the Gospel of John. Here for the first time is a complete English translation of this valuable work, ably translated by Marco Conti and edited by Joel C. Elowsky. Ancient Christian Texts is a series of new translations, most of which are here presented in English for the first time. The series provides contemporary readers with the resources they need to study for themselves the key writings of the early church. The texts represented in the series are full-length commentaries or sermon series based on biblical books or extended scriptural passages.

▼▲
Theodore, born in Antioch (c. 350), was a disciple of Diodore of Tarsus. Ordained a priest of the Church of Antioch in 381, he became, in 392, bishop of Mopsuestia in Cilicia. (Ph.D., University of Leeds) is professor of medieval and humanistic Latin literature at the Ateneo Salesiano and lecturer in classical mythology and religions of the Roman Empire at the Richmond University in Rome. (Ph.D., Drew University) has served as operations manager for the Ancient Christian Commentary on Scripture and as executive director of the Center for Early African Christianity. Thomas C. Oden (19312016), was the general editor of the Ancient Christian Commentary on Scripture and the Ancient Christian Doctrine series as well as the author of , a revision of his three-volume systematic theology. He was the director of the Center for Early African Christianity at Eastern University in Pennsylvania and he served as the Henry Anson Buttz Professor of Theology at The Theological School of Drew University in Madison, New Jersey. Oden was active in the Confessing Movement in America, particularly within the United Methodist Church and was president of The Institute for Classical Christian Studies. He suggested that Christians need to rely upon the wisdom of the historical Church, particularly the early Church, rather than on modern scholarship and theology and said his mission was "to begin to prepare the postmodern Christian community for its third millennium by returning again to the careful study and respectful following of the central tradition of classical Christianity." Gerald L. Bray (Ph.D., La Sorbonne) is a professor at Beeson Divinity School of Samford University in Birmingham, Alabama, and director of research at Latimer Trust. He has written and edited a number of books on different theological subjects. A priest of the Church of England, Bray has also edited the post-Reformation Anglican canons.

▼▲
I'm the author/artist and I want to review Commentary on the Gospel of John: Ancient Christian Texts [ACT].
Back
×
Back
×