EARLY CHRISTMAS SALE: Shop over 900 items up to 85% off through 9/29 >
|The 10 Commandments of Marriage: Practical Principles To Make Your Marriage Great, New Edition
By: Ed Young 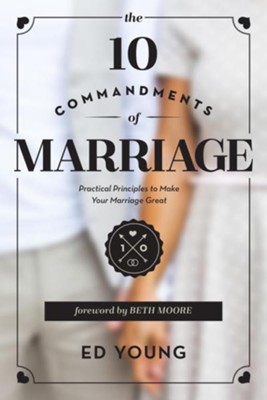 |The 10 Commandments of Marriage: Practical Principles To Make Your Marriage Great, New Edition

Marriage is God's idea. He planned it. He designed it. And if you follow His blueprint, it will be more rewarding, more loving, more exciting than you ever imagined.

In The 10 Commandments of Marriage, Dr. Ed Young shares the "thou shalts" and the "thou shalt nots" of successful relationships—straight from the pages of God's Word. Long-married couples will find love-building precepts that will revive a failing marriage and make a great relationship even better. Soon-to-be-marrieds will discover what marriage is all about and gain priceless insights into starting on solid ground.

In words that are profound, often humorous, but always biblical, Dr. Young draws from decades of counseling couples to provide 10 commandments for a lifelong marriage that sizzles. God wants your marriage to be nothing short of incredible. And it could begin with this amazing book.

"The 10 Commandments of Marriage not only tells you 'what' but, thankfully, also tells you 'how.' Ed Young has taken the principles of Scripture and has had the courage to test them on the linoleum glued to average life on planet earth." — Beth Moore (bestselling author and speaker)

▼▲
ED YOUNG has been the pastor of 32,000-member Second Baptist Church in Houston, Texas, since 1978 and is also a trustee of Southeastern Baptist Theological Seminary and Houston Baptist University. A former president of the Southern Baptist Convention, Ed is the author of many books including The Ten Commandments of Marriage and The Ten Commandments of Parenting, and ministers through the international television and radio broadcasts of Winning Walk. He and his wife, Jo Beth, have three adult sons and seven grandchildren and reside in Houston.

▼▲
I'm the author/artist and I want to review |The 10 Commandments of Marriage: Practical Principles To Make Your Marriage Great, New Edition.
Back
×