Skip to main content
SPRING CYBER EVENT STARTS NOW: And it's a really BIG deal! Up to 88% off through 5/24>
Miss Kay's Duck Commander Kitchen: Faith, Family, and Food-Bringing Our Home to Your Table, Paperback
By: Kay Robertson
Stock No: WW745121 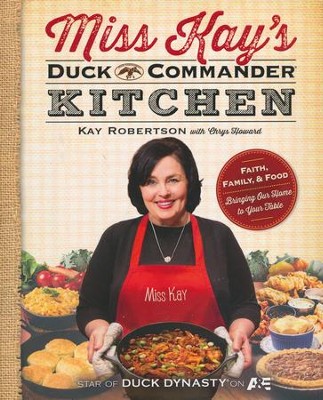 ▼▲
Duck Commander cookbook favorite, Miss Kay's Duck Commander Kitchen is filled with homestyle and hearty recipes that the Robertson's enjoy. Designed to bring their home to your table, with stories of Miss Kay's early days cooking, and an insider view of their family.

As expected, there is a chapter on game cooking including duck, turkey, and squirrel, but the yummy desserts, local favorites and Christmas recipes are a wonderful addition to your collection.

▼▲
The sassy, country-cookin’ matriarch of the Robertson clan and star of A&E®'s Duck Dynasty® dishes up her fabulous recipes and stories in this irresistible family cookbook.

Writing a cookbook for people who love good food has been a lifelong dream for me—and I’m so happy to be sharing some of our family’s favorite recipes with you! In this book you’ll find everything from Jase’s Favorite Sweet Potato Pie to Phil’s own special recipes, like his scrumptious Crawfish Fettuccine. There’s “girly” food for a gathering of your best girlfriends, like Aunt Judy’s Cranberry Salad, as well as dishes straight from the hunt like Boiled Squirrel and Dumplings.

In addition to more than one hundred specially chosen recipes, I’ve included old family snapshots of the days before the Duck Dynasty® series on A&E® and stories of our family and how we live. The dinner table has long been one of our favorite places for telling stories, and there’s always competition to see who can dish out the wildest story. We believe that food and cooking bring people together—it’s brought our family together for generations, and it can do the same for yours. Gather your family around the table and serve up delicious home-cooked meals with recipes like . . .

Join with our family as we create lasting family traditions that will warm the hearts and bellies of those you love. Let’s do it together.

▼▲
Kay Robertson is the revered matriarch of the Robertson family and star of A&E®’s Duck Dynasty®. For almost five decades, she’s been keeping Phil and her boys from spending too much time in the woods by bringing them back to civilization with a home cooked meal. Kay believes her cooking talents are a gift she must share, so she often ends up feeding all of the family and most of the neighborhood. Chrys Howard is the mother of Korie Robertson, star of the A&E® hit TV show Duck Dynasty®. She was a senior editor and creative director for Simon & Schuster. She has edited and cowritten more than 100 books and is the author of nine books with more than 1,000,000 copies in print in six languages. She received a Silver Angel Award from the Hollywood based Excellence in Media organization, the J. C. Penney Golden Rule Award, and has been named among the Who's Who of American Teachers. Chrys Howard lives in West Monroe, Louisiana, with her husband, John. They have three grown children and eleven grandchildren.

▼▲
I'm the author/artist and I want to review Miss Kay's Duck Commander Kitchen: Faith, Family, and Food-Bringing Our Home to Your Table, Paperback.
Back
Back