Skip to main content
BLACK FRIDAY: Thousands of Deals ~ Up to 85% Off Through 11/28. Shop Now >
Coming to Peace with Science: Bridging the Worlds Between Faith and Biology
By: Darrel R. Falk
Stock No: WW27423 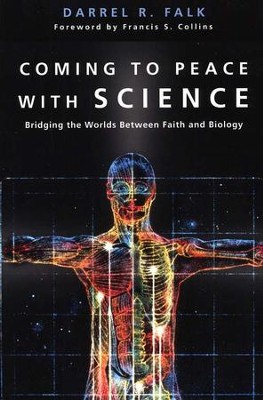 Coming to Peace with Science: Bridging the Worlds Between Faith and Biology

▼▲
(PUBInterVarsity)Creationists and evolutionists have been at each other's throats since the Scopes trial, but is there more common ground than each cares to admit? Falk has wrestled long and hard with expositions of Genesis and the latest research in biology to come up with this fascinating synthesis. 232 pages, softcover.

▼▲
Is a thoroughly Christian and biblically informed doctrine of creation compatible with widely held conclusions of modern science, especially biology? For Darrel R. Falk, this is not just an abstract question but one with which he has personally wrestled. A professor of biology, Falk brings together his biblically based understanding of creation and the most current research in biology. The result of his efforts to acknowledge the validity of science and the authority of Scripture is a new paradigm for relating the claims of science to the truths of Christianity. Written with the undergraduate student in mind, this book nonetheless will help anyone who is looking for a place to stand in the creation-evolution debate, fearful that they'll have to choose between intellectual integrity and the faith of the church. Calling for charitable discussions within the church, Falk shows how an original and ongoing interaction of God with creation is fully reconcilable with the kinds of development identified by current biological science.

▼▲
Falk is professor of biology, associate provost, and dean of graduate studies and continuing education at Point Loma Nazarene University in Point Loma, California. Francis S. Collins (M.D., Ph.D.) is a world-renowned physician-geneticist known for his discovery of the causes of many human genetic diseases. He is also known for spearheading the Human Genome Project, which produced the first complete sequence of human DNA in 2003. In 2006, he published , which spent fourteen weeks on the New York Times bestseller list. In 2007, he founded The BioLogos Foundation to respond to the many queries he receives about science and faith. Since August 2009, he has served as the director of the National Institutes of Health. His most recent books, all authored prior to his current government position, include and the .

▼▲
"In this highly instructive book, Darrel Falk describes his intellectual and spiritual journey in reconciling Christian belief with biological evolution. It is important for the wider body of Christians, many of whom remain skeptical of biological evolution, to grapple with the arguments contained in this book. This book promises to start a real conversation about the role of evolution in relation to the Christian faith, a conversation in which all parties to the creation-evolution debate feel welcome to participate, speak their minds freely and can put forward their best efforts."

▼▲
I'm the author/artist and I want to review Coming to Peace with Science: Bridging the Worlds Between Faith and Biology.
Back
Back