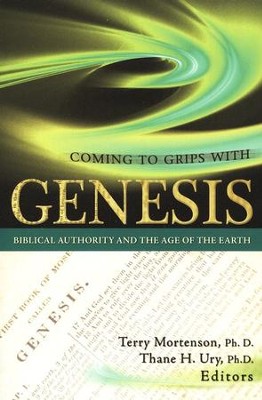 Coming to Grips with Genesis: Biblical Authority and the Age of the Earth

▼▲
The origin of death, deep time, geneological gaps, and various hermeneutical approaches to early biblical texts are just a few of the issues dealt with by creation scientists. Investigations of all these and more are on display in Coming to Grips with Genesis, edited by Dr. Terry Mortenson with essays by himself and other teachers and writers defending the straightforward interpretation of Genesis chapters 1 through 11.
Attacked, dismissed, maligned, and relegated to the status of mythology, the first eleven chapters of Genesis are difficult for some Christians to believe due to liberal theologians, secular science and others holding God's Word in low esteem. But Mortenson and his team of creationist scholars, in the spirit of the late Dr. Henry Morris, write, teach, debate and lecture on creationist topics, and here address elements of scientific creationism in depth that frequently come under fire. Writing intelligently and clearly, Mortenson and over a dozen contributors provide an apologetic text that answers the tough questions many people, both Christians and non-Christians alike, struggle with in their attempts to clarify the theology of Genesis.

▼▲
Dr. Terry Mortenson, M.Div., PhD is a speaker, writer and researcher for the Answers in Genesis ministry. Formerly a staff member of Campus Crusade for Christ, he is the author of The Great Turning Point: The Churchs Catastrophic Mistake With Geology  Before Darwin, as well as and a number of articles and research writings.

▼▲
Fourteen different scholars address key topics related to the age of the earth, which is the crucial issue of debate in the church regarding origins (i.e., most old-earth proponents, like young-earth creationists, reject biological evolution). Bringing to bear rigorous scholarly biblical and theological arguments in favor of a young earth, they also address much needed discussion regarding a number of contemporary interpretations of the book of Genesis. A substantial historical, theological, and exegetical defense of the biblical account of Creation, the book is designed for seminary and Bible college professors and students, ministers, missionaries, and others in ministry work.
Chapters in the book include:

▼▲
I'm the author/artist and I want to review Coming to Grips with Genesis: Biblical Authority and the Age of the Earth.
Back
×