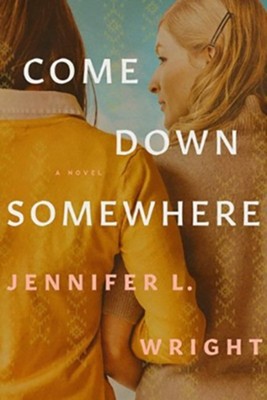 ▼▲
Seven years after the devastating day that tore apart the lives of Jo and her friend Olive, Jo returns to New Mexico angry and betrayed---and looking for answers. But when the truth turns out to be more complicated than she ever imagined, Jo realizes she's racing against time. Can she find Olive before it's too late? 416 pages, softcover from Tyndale.

▼▲
For fans of WWII fiction comes a powerful novel by Jennifer L. Wright about two young women coming of age during the Trinity nuclear bomb test in 1945.

Sixteen-year-old Olive Alexander has lived on a ranch in the Jornada del Muerto region of southern New Mexico her entire life. But when World War II begins, the government seizes her family’s land for the construction of a new, top secret Army post.

While her mother remains behind, Olive is forced to live in nearby Alamogordo with her grandmother and find a place in a new school. When Jo Hawthorne crosses her path, Olive sees a chance for friendship—until she learns that Jo’s father is the Army sergeant who now occupies her beloved ranch. Already angry about her new reality, Olive pushes Jo away. But as she struggles to make sense of her grandmother’s lapses into the past and increasingly unsettling hints about what’s happening at the ranch, she slowly warms to Jo’s winsome faith and steady attempts at friendship . . . until one devastating day when the sky explodes around them and their lives are torn apart.

Seven years later, Jo returns to Alamogordo, still angry and wounded by the betrayals of that fateful day. Determined to put the past behind her once and for all, Jo hunts for answers and begins to realize the truth may be far more complicated than she believed, leading her on a desperate search to find her friend before it’s too late.

▼▲
In her sophomore novel, Wright (If It Rains) peels back the shiny veneer of the Atomic Age to reveal families between a rock and a hard place as they try to protect their loved ones. VERDICT: This is historical fiction as it is meant to be told: a glimpse (based on true events) through the eyes of people caught up in the maelstrom of world events beyond their control.
This affecting coming-of-age story by Wright (If It Rains) follows two young women grappling with the consequences of U.S. involvement in WWII. In late 1944, 15-year-old Olive and her family have to move out of their ranch in Jornada del Muerto, N.Mex., after the military commandeers it as part of a new secret testing facility. The family ends up in nearby Alamogordo, where Olive meets Jo—the daughter of the sergeant now quartered in Olive’s old home—at the local high school. Despite a frosty start, the two become friends, even as Olive’s embitterment about the war makes her skeptical of Jo’s belief in a benevolent God. As the truth about the military facility’s purpose trickles out, it alters the trajectory of Olive and Jo’s lives. In 1952, Jo has grown disillusioned and drifted away from God, and she returns to Alamogordo to take care of her estranged father’s affairs as he dies of cancer. She still struggles to make sense of Olive’s decision seven years earlier to renege on their plans to escape to California together, so Jo determines to find what became of Olive and rediscovers her faith in the process. In Olive and Jo, Wright captures the tenderness of formative friendships, and the characters’ complicated relationships with Christianity testify to how meandering the path of faith can be. The result offers touching meditations on girlhood, friendship, and God.
Jennifer L. Wright’s intelligent and arresting historical novel focuses on two girls who witness the atomic bomb test in New Mexico. In 1944, the US Army claims Olive’s family ranch through eminent domain. Against her will, she’s sent to live with her grandmother in Alamogordo. There, Olive meets Jo, the Christian daughter of the sergeant in charge at the ranch. Olive’s animosity—fueled in part by her feelings of displacement, her agnosticism, confusion about her grandmother’s dementia, and the secrecy surrounding what’s happening back home—push Jo away. But Jo’s faith draws Olive closer, and the girls become friends. A few years after the war, disillusioned Jo returns to New Mexico to put old ghosts to rest. The period of Jo’s transformation is represented as a fascinating, fertile gap; questions about what happened with Olive arise. The girl’s rift ties into the historic test in Jornada del Muerto. Alternating timelines fuel suspense as they move toward that fateful event, mining the changes that led the girls farther from their roots. Faith plays a clear role in Olive and Jo’s stories—as do family betrayals. Though Olive is at first repulsed by what she perceives as naïve Christian piety, she thaws as she witnesses the actions of her grandmother’s warm congregation. And Jo’s steadying presence, paired with her vulnerability, pull Olive into the unexpected joys of friendship. Still, the girls are impacted by the tragedies of war, which touch their loved ones. In time, they experience the pain of abandonment, the relief of returning to faith, and healing. In the moving historical novel Come Down Somewhere, a nuclear test has explosive consequences for a burgeoning friendship.

▼▲
I'm the author/artist and I want to review Come Down Somewhere.
Back
Back