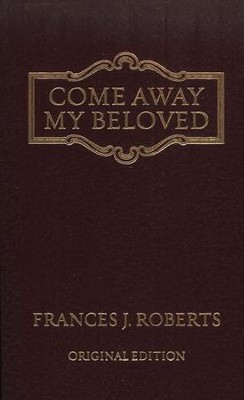 Come Away, My Beloved--Classic Edition

▼▲
In a world of speed and noise, Roberts's devotional is a quiet oasis for the weary soul. For more than 30 years, her lyrical, conversational reflections have helped believers hear God speaking encouragement, hope, comfort, and conviction---directly to them. Includes KJV Scriptures. 256 pages, paperback from Barbour.

. . .to "come away" with your loving heavenly Father-with the classic, original text of the million-selling devotional Come Away, My Beloved.

This powerful book, "forged in the crucible of life," shares the ministering spirit of the heavenly Father to those in need of encouragement, hope, comfort, and conviction. Through compelling prose and poetry, author Frances J. Roberts encourages readers to "come away" and experience God's all- sufficient care and provision.

FRANCES J. ROBERTS (19182009) is best known for her classic devotional Come Away My Beloved. She founded The King's Press in 1964, where she authored and published Come Away and eight other books, selling over 1.5 million copies in 30 years. After graduating from Moody Bible Institute in 1938, Roberts served as Floridas state director for Child Evangelism Fellowship, writing the popular Wordless Book Song during her tenure there. An accomplished musician with eighty-eight published hymns, Roberts also taught at a Spanish mission school and worked as a professional accompanist, performing at various churches.

▼▲
Frances Roberts is a songwriter, a poet, and the author of nine books. After graduating from Moody Bible College, Frances served as a state director for Child Evangelism Fellowship, taught at a Spanish mission school, and worked as a professional accompanist. Eighty-eight of her hymns have been published. In 1964, she founded The King's Press and began releasing books. Over the last 30 years, she has sold over 1.5 million books. Frances has four grown children, four grandchildren, and two great-grandchildren and lives in Ojai, California.

▼▲
I'm the author/artist and I want to review Come Away, My Beloved--Classic Edition.
Back
Back