Skip to main content
CUSTOMER APPRECIATION SALE: Thousands of starry deals through 6/22!
Colossians and Philemon: A Handbook on the Greek Text
By: Constantine R. Campbell
Stock No: WW582927 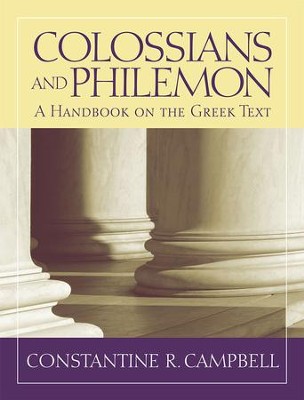 Sample Pages
Buy Item Our Price$37.49
In Stock
Quantity:
Stock No: WW582927
Baylor University Press / 2013 / Paperback
Quantity:
Add To Cart
of These in Your Cart

Colossians and Philemon: A Handbook on the Greek Text

▼▲
Colossians and Philemon delivers to students and teachers an exhaustive and thoughtful translation of the Greek in these two Pauline texts. Constantine R. Campbell reveals the lexical, syntactic, and grammatical features of these New Testament epistles in order to provide a guide through Paul's word to readers with an intermediate knowledge of biblical Greek. The result is a comprehensive study of Pauline Greek that can be used alongside commentaries to better understand the world of the apostle.

About the BHGNT Series
The Baylor Handbook on the Greek New Testament [BHGNT] is designed to guide new readers and seasoned scholars alike through the intricacies of the Greek text. Each handbook provides a verse-by-verse treatment of the biblical text. Unlike traditional commentaries, however, the BHGNT makes little attempt to expound on the theological meaning or significance of the text under consideration. Instead the handbooks serve as "prequals" to commentary proper.

Finally, while the BHGNT series does not consider modern linguistic theory to be the ultimate authority in all matters of exegesis, it does aim both to help move linguistic insights into the mainstream of NT reference works and, at the same time, help weed out remaining myths in popular and academic literature about the language.

Colossians and Philemon delivers to students and teachers an exhaustive and thoughtful translation of the Greek in these two Pauline texts. Constantine R. Campbell reveals the lexical, syntactic, and grammatical features of these New Testament epistles in order to provide readers with an intermediate knowledge of biblical Greek a guide through Paul's words. The result is a comprehensive study of Pauline Greek that can be used alongside commentaries to understand better the world of the Apostle.

Constantine R. Campbell is Associate Professor of New Testament, Trinity Evangelical Divinity School. He is the author of several books, including most recently Paul and Union with Christ: An Exegetical and Theological Study.

One could hardly ask for a more reliable guide than Constantine Campbell.

▼▲
I'm the author/artist and I want to review Colossians and Philemon: A Handbook on the Greek Text.
Back
Back