Skip to main content
CYBER WEEK SALE! Spot great deals up to 88% off. >
Color The Sidewalk For Me - eBook
By: Brandilyn Collins
Stock No: WW80334EB 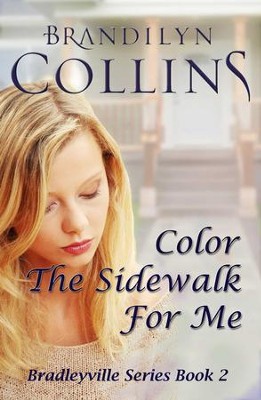 Color The Sidewalk For Me - eBook

▼▲
Bradleyville Series Book 2
----------
As a chalk-fingered child, I had worn my craving for Mama's love on my sleeve. But as I grew, that craving became cloaked in excuses and denial until slowly it sank beneath my skin to lie unheeded butvital, like the sinews of my framework. By the time I was a teenager, I thought the gap between Mama and me could not be wider.
And than Danny came along ...
----------
A splendidly colored sidewalk. Six-year-old Celia presented the gift to her mother with pride and received only anger in return. Why couldn't Mama love her? Years later, when once-in-a-lifetime love found Celia, her mother opposed it. The crushing losses that followed drove Celia, guilt-ridden and grieving, from her Bradleyville home.
Now thirty-five, she must return to nurse her father after a stroke. But the deepest need for healing lies in the rift between mother and daughter. God can perform such a miracle. But first Celia and Mama must let go of the past before it destroys them both.

▼▲
I'm the author/artist and I want to review Color The Sidewalk For Me - eBook.
Back
Back