Skip to main content
SPRING CYBER EVENT STARTS NOW: And it's a really BIG deal! Up to 88% off through 5/24>
Collision of Lies
By: Tom Threadgill
Stock No: WW0736500 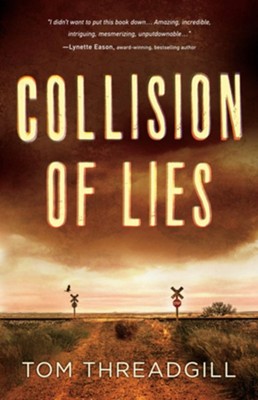 Tom Threadgill might be new on the mystery-writing scene, but he’s no stranger to the genre as a full-time author, editor, and a member of the thriller/suspense publishing board for Lighthouse Publishing of the Carolinas. With a riveting storyline and memorable characters, suspense fans will be turning pages well into the night with his newest novel, Collision of Lies.
Three years ago, a deadly collision between a freight train and a school bus full
of kids led to devastation and grief on an unimaginable scale. But what if one of the children may still be alive? When an unexpected lead turns up, San Antonio police detective Amara Alvarez must convince others—and herself—that despite the evidence, law enforcement does not know the whole story. With time running out, Amara will do everything in her power to bring the missing child home.

▼▲
"Threadgill plunges a detective from the San Antonio Property Crimes Division into a deep-laid plot involving murder, kidnapping, and myriad other crimes above her pay grade."--Kirkus Reviews


Three years ago, a collision between a fast-moving freight train and a school bus full of kids led to devastation and grief on an unimaginable scale. But a fresh clue leads San Antonio police detective Amara Alvarez to the unlikely conclusion that one of the children may still be alive. If she's correct, everything law enforcement believes about the accident is a lie.

With time running out, Amara must convince others--and herself--that despite all evidence to the contrary, the boy lives. And she will do everything in her power to bring him home.

A fresh voice in suspense, Tom Threadgill will have you questioning everything as you fly through the pages of this enthralling story.

▼▲
Tom Threadgill is a full-time author and a member of American Christian Fiction Writers (ACFW). He is currently on the suspense/thriller publishing board for LPC Books, a division of Iron Stream Media. He lives with his wife in rural Tennessee.

1. Tell us what sparked the idea for your new book, Collision of Lies.

My wife and I don’t do much texting. We were at lunch one day and everyone around us was on their phones. For whatever reason (because writers are like that, you know?), I wondered what would happen if a mother received a text from her deceased son. I don’t write paranormal, so I had to take that thought and figure out how to morph it into a realistic situation. That’s how all my stories generate. A “what if” that grows into a novel.

2. The setting for Collision of Lies is San Antonio, Texas. Why did you decide upon this city?

We lived in Dallas for eight years and I visited San Antonio many times. There’s so much to do there and so many story opportunities. The city’s history and strong Hispanic heritage seemed ideal for the story I wanted to tell.

3. You serve on the thriller/suspense publishing board for Lighthouse Publishing of the Carolinas. What do you love most about reading suspense novels and writing them yourself?

Without question, it’s the surprises. The “I didn’t see that coming” moments that good novels offer. When an author does it correctly, everything you thought you knew about the story and the characters can be flipped on its head. When I write, my characters often surprise me. They take on their own lives, and there’s no point trying to force them to behave. If the characters aren’t real, the story isn’t either.

4. The main character, Amara Alvarez, is a San Antonio police detective. Can you tell us a little about her backstory and why you chose a detective as your main character?

All my novels (so far) are police procedurals. I’m a sucker for a strong female protagonist, so I knew from the beginning Amara would be the headliner. She grew up in San Antonio and has a strong family connection there. When the story opens, she’s working in Property Crimes but wants to make the move to Homicide to prove she can handle it. Her father died when she was young, and her marriage ended in divorce. Her job is her life, though we get to watch as she questions whether her decisions are the right ones for her future. Oh, and did I mention she has a three-foot pet iguana named Larry?

5. A good thriller keeps readers on their toes and holding their breath with anticipation. How do you keep your readers guessing when you write your novels?

I’m what’s called a “pantser,” meaning I write by the seat of my pants. I rarely do much plotting. As a result, I’m never quite sure where the story is going to go. I have an idea of the beginning and end but getting from one to the other is a winding path. Many times I write myself into a corner and have to figure out how to get my characters out of the situation without crossing the line into unrealistic action. It’s not unusual for me to realize that a character is doing something behind the scenes I was completely unaware of. If I’m surprised, I think the reader will be too.

6. What do you hope readers will gain from Collision of Lies?

I write to entertain. My goal is to keep my novels real but avoid the graphic sex and profanity that’s so prevalent in books today. I want readers to lose themselves in the story without rolling their eyes at
unrealistic characters who make stupid decisions or can’t complete a sentence without cursing (or cussin’, as we say around here).

▼▲
I'm the author/artist and I want to review Collision of Lies.
Back
Back