Skip to main content
CYBER MONDAY IS HERE! Shop savings up to 88%. >
In the Name of God: The Colliding Lives, Legends, and Legacies of J. Frank Norris and George W. Truett
By: O.S. Hawkins
Stock No: WW743196 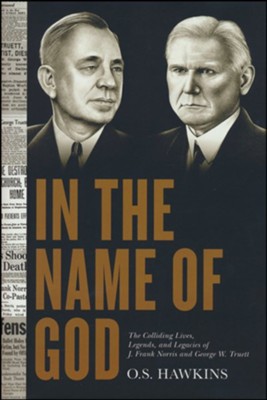 In the Name of God: The Colliding Lives, Legends, and Legacies of J. Frank Norris and George W. Truett

In the Name of God tells the story of two iconic figures of national lore. George W. Truett and J. Frank Norris dominated the ecclesiology and church culture of much of the first half of the twentieth century, not only in Texas, but in the whole of America. Norris, of First Baptist Church in Fort Worth, and Truett, of First Baptist Church in Dallas, lived lives of conflict and controversy. Each led one of the largest churches in the world in the 1920s and '30s. Each shot and killed a man, one by accident and the other in self-defense. Together, their lives were a panoply of intrigue, espionage, confrontation, manipulation, plotting, scheming, and even blackmail—in the name of God. Yet together . . . they changed the world.

▼▲
O. S. Hawkins (PhD, Southwestern Baptist Theological Seminary) is the former pastor of the historic First Baptist Church in Dallas, Texas. Since 1997 he has served as president and chief executive officer of GuideStone Financial Resources, the world’s largest screened mutual fund, serving 250,000 church workers and Christian university personnel. Hawkins is the author of over fifty books, including the best-selling Joshua Code and the entire Code Series, with over two million copies sold. He preaches in churches and conferences across the nation. Visit him at Oshawkins.com and follow him on Twitter (@oshawkins).

▼▲
"In this carefully researched, thoughtfully framed, and beautifully written work, O.S. Hawkins has given us a fresh and illuminating look at two formative figures in Baptist life and American Christianity during the first half of the twentieth century. Even for those who think they are familiar with these stories or who have an overview of Baptist life during this time period, In the Name of God will introduce new observations and connections that will provide eye-opening insights into the legendary lives of George W. Truett and J. Frank Norris. Truett, the ubiquitous leader and stately orator, and Norris, the fiery fundamentalist and Texas tornado, overlapped in so many contexts, yet understood their callings and purposes ever so differently. The first half of this book reads like a page-turning novel; the second half of the book offers a hermeneutical guide to the diverse and distinctive contributions of Truett and Norris, as well as to the longer-term implications of their approaches to life and ministry. Even if historians should quibble over some of the interpretive explanations offered, this book will be fascinating reading for all who are interested in twentieth-century religious movements and American culture, and will be essential reading for anyone interested in the various trajectories that Baptist life has taken in recent decades."
—David S. Dockery, distinguished professor of theology, Southwestern Baptist Theological Seminary, and president, International Alliance for Christian Education

"No one is better qualified to tell the untold story of Baptist legends J. Frank Norris and George W. Truett than my lifelong friend O. S. Hawkins. His own family roots run deep in the history of First Baptist Church in Fort Worth, and for several years he was one of George W. Truett’s pastoral successors at the historic First Baptist Church in Fort Worth. This story of these entwining lives and legacies reads like a page-turning novel. It reveals the dangers of elevating denominational loyalty over scriptural fidelity."
—Jack Graham, pastor, Prestonwood Baptist Church, Plano, TX

"Take two titanic personalities, two great cities, two famous pulpits, and two of the largest churches in the world—and then add two men shot dead, two rival visions of Christianity, two lasting legacies, and one earth-shaking feud, and you have O. S. Hawkins’ book, In the Name of God. This is one of the most fascinating stories of our time, written by the one man who has a claim upon the entire story. It is incredibly well told and tremendously relevant. I recommend it eagerly."
—R. Albert Mohler Jr., president, The Southern Baptist Theological Seminary

"My roots are deep in First Baptist Church of Fort Worth, having been licensed and ordained to the ministry there. I have enjoyed every page of O. S. Hawkins’ book. It is accurate in its history and has restored some balance to the life of a man who has too often been reviled. O. S. has brought the characters to life again—a few I actually knew and others whose stories I heard from eyewitnesses. Thank you for a great read."
—Bill Monroe, pastor, Florence Baptist Temple, Florence, SC

"This book by O. S. Hawkins, a Texas legend in his own right, is a marvelous read. It is well-researched, historically conversant, and written by a biographer who has a keen, almost barrel-aged, understanding of the human soul and psyche. Hawkins is close to his subjects in that he clearly honors and, in some ways, reveres them. However, his study of Truett and Norris is never hagiographic. It presents each man in full color, and works in colorful and arresting portraits of their peers, Baptist titans like L. R. Scarborough, W. A. Criswell, and more. In the Name of God is indeed clear-eyed about how both Truett and Norris failed in different ways. The study of two contrasting styles yields much wisdom in the gleaning, and reminds this reviewer of the outstanding juxtaposition of Hitler and Churchill by elite biographer Andrew Roberts.

In sum, I regard this work with considerable respect and interest. It is academic and well-grounded in historical disputation but eminently readable and arresting. I learned numerous details from each man’s career, and I found the material edifying and engrossing. Rehabilitating J. Frank Norris to some degree is a job for which there are few takers, but Hawkins succeeds in that task, and thus performs a service to the historical guild. All in all, In the Name of God is a rich study, and should make a real contribution to the conversation over this most vaunted of Baptist eras."
—Owen Strachan, associate professor of Christian theology, Midwestern Baptist Theological Seminary

"O. S. Hawkins’ best-selling Code books are already considered devotional classics. His In the Name of God will become a primary source for those who want to understand Southern Baptist history in general and the Conservative Resurgence in particular. Dr. Hawkins reveals in a new and fresh way how the issues in the Conservative Resurgence simply reflected the earlier controversies of the 1920’s in SBC life.

Some today, like George Truett of old, still place denominational loyalty over doctrinal fidelity while others, as Hawkins so skillfully shows, keep their priority grounded in doctrinal truth. Frank Norris’ rallying of thousands of pastors from the ’folks from the forks of the creeks’ was simply a harbinger of the mobilization of the masses of pastors supporting the inerrancy debate during the 1980’s. No one yet has connected these dots as Hawkins so effectively does in this volume. Dr. Hawkins’s unique perspective as a Fort Worth native and as the much-loved pastor of First Baptist Church of Dallas qualify him to give us this vital resource."
—Jerry Vines, pastor emeritus, First Baptist Church, Jacksonville, FL, and two-time president, the Southern Baptist Convention

▼▲
I'm the author/artist and I want to review In the Name of God: The Colliding Lives, Legends, and Legacies of J. Frank Norris and George W. Truett.
Back
Back