Skip to main content
Get Christmas Ready Sale: Deals on over 1,150 titles thru 9/27.
The Every Amish Season Collection: Upon a Spring Breeze, Beneath the Summer Sun, Through the Autumn Air, With Winter's First Frost / Digital original - eBook
By: Kelly Irvin
Stock No: WW99516EB 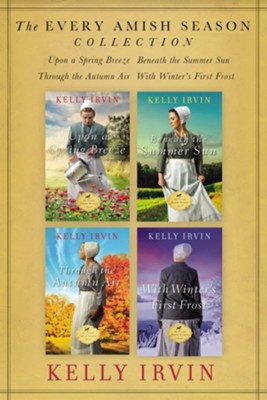 The Every Amish Season Collection: Upon a Spring Breeze, Beneath the Summer Sun, Through the Autumn Air, With Winter's First Frost / Digital original - eBook

A tragic accident kills Bess Weaver’s husband. Now she faces life as a young widow with a son to raise on her own. Aidan feels guilty over his friend Caleb’s death. As he spends time with his friend’s young son, he finds himself growing closer to the boy and his beautiful mother. Bess fears she will never find love and joy again. Will Aidan be able to show her happiness is once again possible?

From bestselling author Kelly Irvin, the compelling Every Amish Season novels are now available in one e-book collection.

Upon a Spring Breeze

Facing life as a young widow, Bess finds comfort only in tending the garden at an Englisch-owned bed and breakfast—even as she doubts that new growth could ever come after such a long winter.

Aidan tries to repress his guilt over his best friend Caleb’s death and his long-standing feelings for Bess by working harder than ever. But as he spends time with the young son his friend left behind, he seems to be growing closer to the boy’s beautiful mother as well.

When a close-knit group of widows in her Amish community step in to help Bess find her way back to hope, she begins to wonder if Gott has a future for her after all.

Beneath the Summer Sun

It’s been four years since Jennie’s husband died in a farming accident. Long enough that the elders in her Amish community think it’s time to marry again for the sake of her seven children. What they don’t know is that grief isn’t holding her back from a new relationship. Fear is. A terrible secret in her past keeps her from moving forward.

Mennonite book salesman Nathan Walker stops by Jennie’s farm whenever he’s in the area. Despite years of conversation and dinners together, she never seems to relax around him. He knows he should move on, but something about her keeps drawing him back.

Meanwhile, Leo Graber nurtures a decades-long love for Jennie, but guilt plagues him—guilt for letting Jennie marry someone else and guilt for his father’s death on a hunting trip many years ago. How could anyone love him again—and how could he ever take a chance to love in return?

Through the Autumn Air

The mother of ten and a widow of seven years, Mary Katherine's last child is married, and she pours her abundant creative spirit into writing stories. Her dream is to open a bookstore with an English friend, but the church elders want this wayward widow to work in an Amish-owned store instead. When her old school friend, Ezekiel, offers her a position as a cook in the restaurant he opened after his wife died, she knows she should accept.

When a mysterious English stranger breaks into her house to make himself a sandwich one autumn night, Mary Katherine doesn’t call the sheriff. She turns to Ezekiel. They both see that Burke is in need of more than a meal, and Ezekiel offers him the job at the restaurant.

As they set out to care for their new friend, Mary Katherine and Ezekiel find themselves often working together. Can two people in the autumns of their lives and so well-versed in the pain of loss put the past behind them and trust in the hope that comes with each new season?

Laura Kauffman has been a widow for eight years. She tries to keep herself busy with her nine children, fifty-two grandchildren, and twenty-eight great-grandchildren. But she can’t stop wondering: What does God expect her to do with her days now? It's a question she can’t answer until a friend needs someone to help care for her newborn twins and three older children.

Zechariah suffers from Parkinson’s disease. When his wife died two years earlier, his children insisted he live with one of his grandsons. He feels he has outlived his usefulness. Then Laura comes along and seems determined to change that.

▼▲
I'm the author/artist and I want to review The Every Amish Season Collection: Upon a Spring Breeze, Beneath the Summer Sun, Through the Autumn Air, With Winter's First Frost / Digital original - eBook.
Back
Back