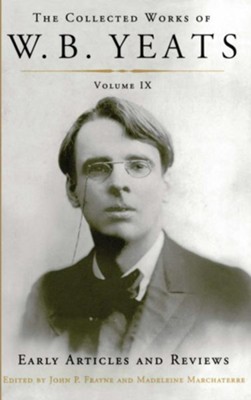 ▼▲
The Collected Works of W. B. Yeats, Volume IX: Early Articles and Reviews is part of a fourteen-volume series under the general editorship of eminent Yeats scholars Richard J. Finneran and George Mills Harper. This first complete edition includes virtually all of the Nobel laureate's published work, in authoritative texts with extensive explanatory notes.

Coedited by John P. Frayne and Madeleine Marchaterre, Early Articles and Reviews assembles the earliest examples of Yeats's critical prose, from 1886 to the end of the century -- articles and reviews that were not collected into book form by the poet himself. Gathered together now, they show the earliest development of Yeats's ideas on poetry, the role of literature, Irish literature, the formation of an Irish national theater, and the occult, as well as Yeats's interaction with his contemporary writers. As seen here, Yeats's vigorous activity as magazine critic and propagandist for the Irish literary cause belies the popular picture created by his poetry of the "Celtic Twilight" period, that of an idealistic dreamer in flight from the harsh realities of the practical world.

This new volume adds four years' worth of Yeats's writings not included in a previous (1970) edition of his early articles and reviews. It also greatly expands the background notes and textual notes, bringing this compilation up to date with the busy world of Yeats scholarship over the last three decades. Early Articles and Reviews is an essential sourcebook illuminating Yeat's reading, his influences, and his literary opinions about other poets and writers.

▼▲
William Butler Yeats is generally considered to be Ireland’s greatest poet, living or dead, and one of the most important literary figures of the twentieth century. He was awarded the Nobel Prize in Literature in 1923.

▼▲
I'm the author/artist and I want to review The Collected Works of W.B. Yeats Volume IX: Early Art: Uncollected Articles and Reviews Written Between 1886 and 1900 - eBook.
Back
Back