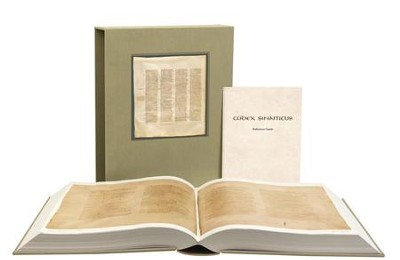 The Codex Sinaiticus is not only one of the most important manuscripts for the purposes of biblical translation and for the study of the textual history of the Christian Bible, it is also a beautiful and fascinating piece of history. Now you can display the delicate beauty of this important text-its parchment, inks, and scars, all visible in incredible detail-for all to see.The folios include two of the most historically significant and best preserved pages reproduced as prints, suitable for framing: Songs of Songs 1:8-2:15, and John 20:1-21:1.
Painstakingly photographed using the latest high-quality digital technology and a careful imaging process, the folios are printed on the same high-quality, acid-free paper as the Facsimile Edition; packaged in a sturdy tube for shipping and storing; easy to wrap and give as a scholarly gift.

▼▲
I'm the author/artist and I want to review Codex Sinaiticus, Facsimile Edition.
Back
Back