Skip to main content
BRING CHRISTMAS HOME SALE: Save up to 85% through 11/2 >
Climbing The Mountain: My Search For Meaning
By: Kirk Douglas
Stock No: WW86584X 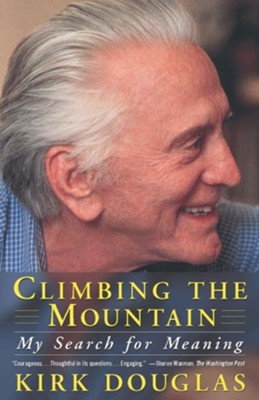 Climbing The Mountain: My Search For Meaning

▼▲
With the simple power and the astonishing candor that made his 1988 autobiography, The Ragman's Son, a number one international bestseller, Kirk Douglas now shares his quest for spirituality and Jewish indentity--and his heroic fight to overcome crippling injuries and a devasting stoke.

▼▲
With the simple power and astonishing candor that made his 1988 autobiography, The Ragman's Son, a number one international bestseller, Kirk Douglas now shares his quest for spirituality and Jewish identity -- and his heroic fight to overcome crippling injuries and a devastating stroke.
On February 13, 1991, at the age of seventy-four, Kirk Douglas, star of such major motion-picture classics as Champion, Spartacus, and Paths of Glory, was in a helicopter crash, in which two people died and he himself sustained severe back injuries. As he lay in the hospital recovering, he kept wondering: Why had two younger men died while he, who had already lived his life fully, survived?
The question drove this son of a Russian-Jewish ragman to a search for his roots and on a long journey of self-discovery -- a quest not only for the meaning of life and his own relationship with God, but for his own identity as a Jew. Through the study of the Bible, Kirk Douglas found a new spirituality and purpose. His newfound faith deeply enriched his relationship with his own children and taught him -- a man who had always been famously demanding and impatient -- to listen to others and, above all, to hear his own inner voice.
Told with warmth, wit, much humor, and deep passion, Climbing the Mountain is inspirational in the very best sense of the word.

▼▲
Sharon Waxman The Washington Post Corageous....Thoughtful in its questions....Engaging.
Barbara Fisher The Boston Globe The sincerity and simplicity of this memoir make it almost impossible to criticize.
Larry King USA Today Kirk Douglas' memoir, Climbing the Mountain, is one terrific book.
President Jimmy Carter Kirk Douglas shares his very personal search for the meaning of life, and through his struggle, he helps us all discover our own spirituality.

▼▲
I'm the author/artist and I want to review Climbing The Mountain: My Search For Meaning.
Back