Skip to main content
Climbing Into Eternity: My Descent in Hell and Flight to Heaven
By: Michele Pulford
Stock No: WW14249X 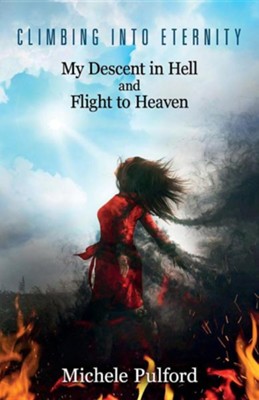 Climbing Into Eternity: My Descent in Hell and Flight to Heaven

Michele flirted with death for six years, trying to numb her pain following a sexual pervert's attack. Attempting to protect herself, she allowed hatred of men to control her, and used mind control to manipulate others. Suffering with acute anorexia nervosa, she was pronounced dead on arrival at the hospital at age twenty-three.

She woke up in hell, a place of eternal damnation, horror, torment, and fire. Rescued by the Savior whose soft, gentle voice she had rejected, Michele was given a new chance at life and turned wholeheartedly to the Lord.

When her body was completely paralyzed from an anaphylactic allergy attack as a young mother, she found life leaving her body once again. "This time," she says, "I was ushered into the splendorous glory of Heaven-a place of almost indescribable light and love."

Sent back to tell her story, Michele Pulford warns others of the horrors of the kingdom of darkness, and tells them of the glory of true abundant life in God's kingdom of light.

This personal love story, as well as a story about death and eternal life, is both a warning and a promise, and ultimately an unforgettable account of the love of God that would not let a young woman go.

Too many people, including many Christians, are totally unaware of the eternal dimension of life with a Heaven to gain and Hell to shun. I trust all those who read about her [Michele's] journey will be motivated to live a life that would assure them of a place in Heaven.

▼▲
I'm the author/artist and I want to review Climbing Into Eternity: My Descent in Hell and Flight to Heaven.
Back