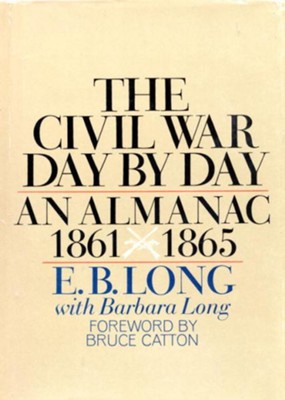 ▼▲
"In all the vast collection of books on the American Civil War there is no book like this one," says Bruce Catton. Never before has such a stunning body of facts dealing with the war been gathered together in one place and presented in a coherent, useful, day-by-day narrative. And never before have statistics revealed human suffering of such heroic and tragic magnitude.

The text begins in November, 1860, and ends with the conclusion of hostilities in May, 1865, and the start of reconstruction. It is designed to furnish the reader not only with information, but to tell a story. Here, in addition to the momentous events that are a familiar part of our history, the daily entries recount innumerable lesser military actions as well as some of the other activities and thoughts of men great and unknown engaged in America’s most costly war:

&middot; May 5, 1864—a private in the Army of Northern Virginia writes at the beginning of the Battle of the Wilderness, "It is a beautiful spring day on which all this bloody work is being done."

&middot; May 6, 1864—Gen. Lee rides among his men and is shouted to the rear by his protective troops.

&middot; April 30, 1864—Joe David, five-year-old son of the Confederate President, dies after a fall from the high veranda of the White House in Richmond.

&middot; April 14, 1865—President Lincoln’s busy day includes a Cabinet meeting where he tells of his recurring dream of a ship moving with great rapidity toward a dark and indefinite shore; that night Mr. Lincoln attends a performance of a trifling comedy at Ford’s Theatre, "Our American Cousin".

▼▲
The Civil War Day By Day is divided into months, each month preceded by a summary which helps to set the military and political facts in context of the time and reveals the attitudes of the people, North and South, toward the war at that point. This unique volume’s features include special studies, covering the facts and figures of population, casualties, and the economics of the war; an Index by Dates; and the complete bibliography of Bruce Catton’s The Centennial History of the Civil War for which project E. B. Long served as director of research.