The Fall of the House of Dixie: The Civil War and the Social Revolution That Transformed the South - eBook
By: Bruce Levine 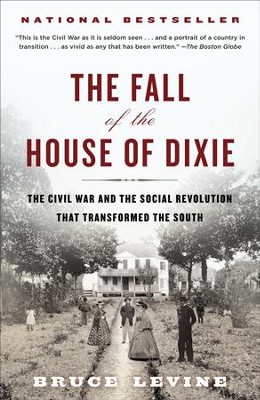 The Fall of the House of Dixie: The Civil War and the Social Revolution That Transformed the South - eBook

▼▲
In this major new history of the Civil War, Bruce Levine tells the riveting story of how that conflict upended the economic, political, and social life of the old South, utterly destroying the Confederacy and the society it represented and defended. Told through the words of the people who lived it, The Fall of the House of Dixie illuminates the way a war undertaken to preserve the status quo became a second American Revolution whose impact on the country was as strong and lasting as that of our first.

In 1860 the American South was a vast, wealthy, imposing region where a small minority had amassed great political power and enormous fortunes through a system of forced labor. The South’s large population of slaveless whites almost universally supported the basic interests of plantation owners, despite the huge wealth gap that separated them. By the end of 1865 these structures of wealth and power had been shattered. Millions of black people had gained their freedom, many poorer whites had ceased following their wealthy neighbors, and plantation owners were brought to their knees, losing not only their slaves but their political power, their worldview, their very way of life. This sea change was felt nationwide, as the balance of power in Congress, the judiciary, and the presidency shifted dramatically and lastingly toward the North, and the country embarked on a course toward equal rights.

Levine captures the many-sided human drama of this story using a huge trove of diaries, letters, newspaper articles, government documents, and more. In The Fall of the House of Dixie, the true stakes of the Civil War become clearer than ever before, as slaves battle for their freedom in the face of brutal reprisals; Abraham Lincoln and his party turn what began as a limited war for the Union into a crusade against slavery by issuing the Emancipation Proclamation; poor southern whites grow increasingly disillusioned with fighting what they have come to see as the plantation owners’ war; and the slave owners grow ever more desperate as their beloved social order is destroyed, not just by the Union Army, but also from within. When the smoke clears, not only Dixie but all of American society is changed forever.

Brilliantly argued and engrossing, The Fall of the House of Dixie is a sweeping account of the destruction of the old South during the Civil War, offering a fresh perspective on the most colossal struggle in our history and the new world it brought into being.

Praise for The Fall of the House of Dixie

"This is the Civil War as it is seldom seen. . . . A portrait of a country in transition . . . as vivid as any that has been written."—The Boston Globe

"More poignantly than any book before, The Fall of the House of Dixie shows how deeply intertwined the Confederacy was with slavery, and how the destruction of both made possible a ’second American revolution’ as far-reaching as the first."—David W. Blight, author of American Oracle

"Splendidly colorful . . . Levine recounts this tale of Southern institutional rot with the ease and authority born of decades of study."—Kirkus Reviews (starred review)

"A deep, rich, and complex analysis of the period surrounding and including the American Civil War."—Publishers Weekly (starred review)

▼▲
Bruce Levine is the J. G. Randall Distinguished Professor of History at the University of Illinois. An associate editor of the Civil War magazine North and South, he has published three books on the Civil War era. The most recent of these, Confederate Emancipation: Southern Plans to Free and Arm Slaves During the Civil War, received the Peter Seaborg Award for Civil War Scholarship and was named one of the ten best nonfiction books of 2005 by The Washington Post.

▼▲
"This is the Civil War as it is seldom seen . . . and a portrait of a country in transition . . . as vivid as any that has been written."—The Boston Globe

"More poignantly than any book before, The Fall of the House of Dixie shows how deeply intertwined the Confederacy was with slavery, and how the destruction of both made possible a ’second American revolution’ as far-reaching as the first."—David W. Blight, author of American Oracle

"Splendidly colorful . . . Levine recounts this tale of Southern institutional rot with the ease and authority born of decades of study."—Kirkus Reviews (starred review)

"A deep, rich, and complex analysis of the period surrounding and including the American Civil War."—Publishers Weekly (starred review)

"This book limns the relationship between slavery and the rise and fall of the Confederacy more clearly and starkly than any other study. General readers and seasoned scholars alike will find new information and insights in this eye-opening account."—James M. McPherson, author of Battle Cry Freedom

"With his characteristic judiciousness and crystalline prose, Bruce Levine demonstrates the toll that disaffection and dissent took on the Confederate cause and brings into sharp focus what the Union victory, enduringly, achieved. He has, in short, written another modern classic."—Elizabeth R. Varon, author of Disunion!: The Coming of the American Civil War, 1789–1859

"A gripping, lucid grassroots history of the Civil War that declines the strict use of great battles and Big Men as its fulcrum, opting instead for the people. In the tradition of James McPherson, Bruce Levine has produced a book that is a work of both history and literature."—Ta-Nehisi Coates, author of The Beautiful Struggle

"Levine illuminates the experiences of southern men and women—white and black, free and enslaved, civilians and soldiers—with a sure grasp of the historical sources and a deft literary touch. He masterfully recaptures an era of unsurpassed drama and importance."—Gary W. Gallagher, author of The Confederate War

"A compelling, valuable and eye-opening work [that] will inform and entertain the most discerning student of ’the second American revolution.’"—The San Antonio Express-News

"Masterful . . . Levine’s employment of testimonies by slaveholders, slaves, and pro-Union Southerners is effective and often poignant."—Booklist

"Levine’s engrossing story chronicles the collapse of a doomed republic—the Confederate States of America—built on the unstable sands of delusion, cruelty, and folly."—Adam Goodheart, author of 1861: The Civil War Awakening

"Bruce Levine vividly traces the origins of the ’slaveholders’ rebellion’ and its dramatic wartime collapse. With this book, he confirms his standing among the leading Civil War historians of our time."—James Oakes, author of Freedom National

"Eloquent and illuminating . . . Shifting away from traditional accounts that emphasize generals and campaigns, Levine instead offers a brilliant and provocative analysis of the way in which slaves and non-elite whites transformed the conflict into a second American Revolution."—Douglas R. Egerton, author of Year of Meteors

"The idea that Southern secession was unconnected to the defense of slavery has a surprising hold on the popular historical imagination, North and South. Levine’s demolition of such a misapprehension profoundly succeeds as both argument and drama."—David Roediger, coauthor of The Production of Difference

"Thorough, convincing, and, in a word, brilliant. Our understanding of this central event in American history will never be the same."—Marcus Rediker, author of The Slave Ship

"The Fall of the House of Dixie will delight and disturb—and provide much needed clarity as Americans take a fresh look at the meaning of the Civil War."—Ronald C. White, Jr., author of A. Lincoln

"The story of a war waged off the battlefield, a war of politics and ideology that transformed both Southern and Northern culture unfolds brilliantly in the able hands of this fine historian."—Carol Berkin, author of Revolutionary Mothers

"Levine offers a fresh perspective on this oft-told story by relying heavily on personal letters, journals and diaries. . . . Brushing aside the notion that slavery was merely one of many issues over which the war was fought, Levine . . . shows that it was at the center of everything—the economy, culture, social relationships and worldview."—BookPage

"Levine’s well-documented study . . . provides a concise and well-written overview of the conflict and a cogent discussion of . . . still-polarizing issues."—The Dallas Morning News

▼▲
I'm the author/artist and I want to review The Fall of the House of Dixie: The Civil War and the Social Revolution That Transformed the South - eBook.
Back
×
Back
×