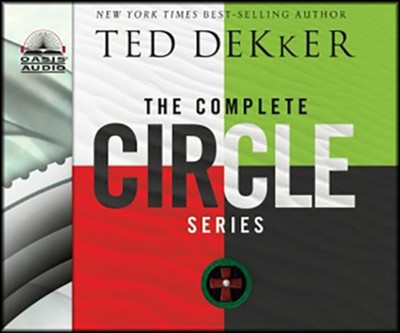 By: Ted Dekker
More in Circle Series
Oasis Audio / Compact disc
5 out of 5 stars (2 Reviews) Write a Review
In Stock
Stock No: WW591604

Green, Circles Series #0 At Last . . . The Circle Reborn The story of how Thomas Hunter first entered the Black Forest and forever changed our history began at a time when armies were gathered for a final battle in the valley of Migdon. Green is a story of love, betrayal, and sweeping reversals set within the apocalypse. It is the beginning: the truth behind a saga that has captured the imagination of more than a million readers with the Books of History Chronicles. But even more, Green brings full meaning to the Circle Series as a whole, reading as both prequels to Black and sequel to White, completing a full circle. This is Book Zero, the Circle Reborn, both the beginning and the end. The preferred starting point for new readers . . . and the perfect climax for the countless fans that've experienced Black, Red, and White. Unabridged. 12 CDs. 15 hours. Read by Tim Gregory.

Black, Circles Series #1 Fleeing assailants through alleyways in Denver late one night, Thomas Hunter narrowly escapes to the roof of an industrial building. Then a silent bullet from the night clips his head and his world goes black. Now Thomas wakes from a deep sleep, remembering the vivid dream he just had of being chased. Incredibly real. His head is even bleeding--but he's fallen on a rock. He is in a green forest, waiting to meet Rachelle, the woman he's falling madly in love with. That night, Thomas tumbles into bed and falls into a fitful sleep. He dreams. But here comes the real mind bender. Every time Thomas falls asleep in one reality, he awakes in the other. He truly no longer knows which reality is real. Each reality has dramatic impact on the other, each proves to be real, each presents huge stakes, and the fate of each will depend on one man: Thomas Hunter. Unabridged. 12 CDs. 12 hours. Read by Rob Lamont.

Red, Circles Series #2 Red centers around the heroic rescue attempts of Thomas Hunter to save both worlds. With the devastating realization that he has unleashed death into both worlds, he now must figure out how to undo this evil-while trying to save his true love. From meeting with world powers in one world to leading a small band of mighty warriors in the great forests of the other world, Thomas is determined to change the history of two realities-or sacrifice all in trying. Unabridged. 12 CDs. 15 hours. Read by Rob Lamont.

White, Circles Series #3 In this final installment of Ted Dekker's ground-breaking Circle trilogy, Thomas Hunter has only days to survive two separate realms of danger, deceit, and destruction. The fate of both worlds now rests on his unique ability to shift realities through his dreams, carry out the charge given to a small ragtag group known as The Circle, and earn the forbidden love of a most unlikely woman. Enter the great pursuit, where Thomas and a small band of followers must decide quickly who they can trust--both with their own lives and the fate of millions. Neither the terror of Black nor the treachery of Red can prepare Thomas for the forces aligned against The Circle in White. Unabridged. 12 CDs. 15 hours. Read by Rob Lamont.

▼▲
This audiobook compilation contains each volume of the Circle Series (Black, Red, White, and Green) by Ted Dekker.

▼▲
Since 1997, Ted Dekker has written full-time. He states that each time he writes, he finds his understanding of life and love just a little clearer and his expression of that understanding a little more vivid. Dekker’s body of work includes Heaven’s Wager, When Heaven Weeps, Thunder of Heaven, Blessed Child, A Man Called Blessed, Blink, Thr3e, The Circle Series: Black, Red, White, Green (a prequel), and Obsessed.

▼▲
I'm the author/artist and I want to review Circle Series - unabridged audiobook on CD.
Back
×