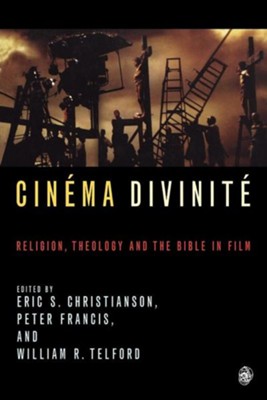 Cinema Divinite: Religion, Theology and the Bible in Film

▼▲
Cinema Divinite sets out various critical approaches to the study of film and theology such as formalism, expressionism, realism, textual analysis, contextual analysis, post-modern eclecticism, narrative criticism and cultural studies. It examines the major concepts in film studies such as cinema spectatorship, the nature and application of film theory to theology, and includes a discussion of the extensive literature which has been published recently on the film and religion. The book also examines case studies of specific films, filmmakers, and genres - from film noir to animation and the western. The final part looks specifically at religion within film with a concluding discussion of the recently released The Passion of the Christ.

▼▲
"The chapter which deals with the way in which different directors have coped with the problem of anti-Semitism in the New Testament has particular relevance for today's interfaith dialogue." Rev David Bridge, supernumerary minister in the Portsmouth circuit, Methodist Recorder's television and radio reviewer. Methodist Recorder, September 14, 2006.

"This book is a very good introduction to the way art and Christian enquiry can be positively related in film. It has to be on the reading list of all who are interested in films and in theology and in the possible relations between them." Keith Ward, Professor of Divinity at Gresham College, London, Fellow of the British Academy. Art and christianity, January 2007.

▼▲
I'm the author/artist and I want to review Cinema Divinite: Religion, Theology and the Bible in Film.
Back
×