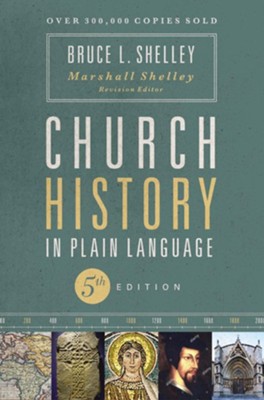 Church history made fascinating! Bruce Shelley offered a lively account of the church from apostolic times to the present. Now Marshall Shelley has gathered historians, historical theologians, and editors to revise and update his father's classic. They've added information about Christianity's development in Asia, India, and Africa; the stories of overlooked women and non-Europeans; and more.

Over 330,000 copies sold. This is the story of the church for today's readers.

Bruce Shelley's classic history of the church brings the story of global Christianity into the twenty-first century. Like a skilled screenwriter, Shelley begins each chapter with three elements: characters, setting, plot. Taking readers from the early centuries of the church up through the modern era he tells his readers a story of actual people, in a particular situation, taking action or being acted upon, provides a window into the circumstances and historical context, and from there develops the story of a major period or theme of Christian history. Covering recent events, this book also:

For this fifth edition, Marshall Shelley brought together a team of historians, historical theologians, and editors to revise and update this father's classic text. The new edition adds important stories of the development of Christianity in Asia, India, and Africa, both in the early church as well as in the twentieth and twenty-first centuries. It also highlights the stories of women and non-Europeans who significantly influenced the development of Christianity but whose contributions are often overlooked in previous overviews of church history.

This concise book provides an easy-to-read guide to church history with intellectual substance. The new edition of Church History in Plain Language promises to set a new standard for readable church history.

Marshall Shelley (MDiv, DD, Denver Seminary) is director of the Doctor of Ministry program at Denver Seminary. He has previously served as an editor and vice president at Christianity Today International for thirty-four years, including several years as executive editor of Christian History magazine.

▼▲
I'm the author/artist and I want to review Church History in Plain Language.
Back
Back