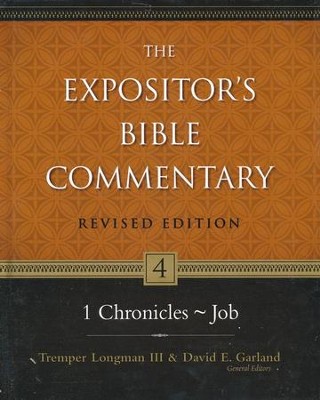 ▼▲
Continuing a Gold Medallion award-winning legacy, this completely revised edition of the Expositor's Bible Commentary series puts world-class scholarship in your hands. Based on the original 12-volume set that has become a staple in college and seminary libraries and pastors' studies worldwide, this new thirteen-volume edition marshals the most current evangelical scholarship and resources.Of the 56 contributors, thirty of them are new to the series. Reflecting the commentary's international and cross-denominational approach, they come from the United States, Canada, England, Scotland, Australia, and New Zealand, and from a broad diversity of churches, including Anglican, Baptist, Brethren, Methodist, Nazarene, Presbyterian, and Reformed.

The Expositor's Bible Commentary uses the complete NIV for its English text, but it also refers freely to other translations and to the original languages. Features of the Revised Edition
issues

▼▲
I'm the author/artist and I want to review 1 Chronicles-Job, Revised: The Expositor's Bible Commentary.
Back
Back