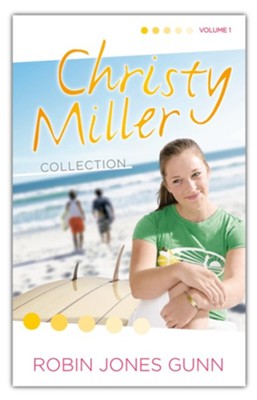 ▼▲
In Christy Miller Series: 3-in-1 Collection, Volume 1by Robin Jones Gunn, readers will follow teenager Christy, who meets two life-changing friends on her vacation to California. After moving across the country with her family, Christy is uncertain if she can fit it as she starts her sophomore year of high school. Follow Christy Miller as she stays true to her identity in Christ, drawing closer to God as she deals with disappointments and trusts in him when seeking his help in realizing her dreams. Paperback, 496 pages. Ages 12-15.

This collection contains volumes 1, 2 and 3, from the 12 volume series. Volume 1: Summer Promise | Volume 2: A Whisper and a Wish | Volume 3: Yours Forever

Bestselling author Robin Jones Gunn packs each one with enough action, romance, and drama to keep you reading and wanting more. It all starts the summer Christy vacations on a California beach and meets two friends who change her life forever. But after moving across the country with her family, Christy must begin her sophomore year of high school uncertain where she’ll fit in. A red-headed new best friend, a try at cheerleading, a job at a pet store, and expectations for the prom fill Christy’s high school years with a string of laughter-and-tears moments. Fireball Katie keeps everyone guessing what she’ll do next, and surfer Todd keeps showing up while popular Rick has determined to get her full attention! As these memorable years unfold, Christy and her God-loving friends find out what it means to be a "peculiar treasure." Follow Christy Miller as she stays true to her identity in Christ, drawing closer to God for help in realizing her dreams and dealing with her disappointments.

Christy Is a Forever Friend

Fourteen-year-old Christy Miller has the dream summer ahead of her in sun-kissed California, staying with her aunt and uncle at their beachfront home. Aunt Marti loves to shop, and those surfers are cute—especially Todd. Christy promised her parents she wouldn’t do anything she’d regret later, and some of her beach friends are a little wild. But Todd and his "God-Lover" friends are giving Christy a new image of all things eternal. Can this summer live up to its promise?

A Whisper and a Wish

Christy’s family has moved to California just in time for her sophomore year of high school. But they’re not in Newport Beach, where she spent the summer. Instead they’re an hour and a half away and Christy has to start all over making friends. Despite an embarrassing escapade at a slumber party, things are going pretty well...until some midnight fun leads to a trip to the police station. Does God really hear every whisper? Does He know our every wish? Then why is it so hard to know who your friends really are?

Christy is back at Aunt Marti and Uncle Bob’s house on the beach for the entire week between Christmas and New Year’s...and Todd is in town, too! The cute surfer completely captured Christy’s heart last summer, and she’s eager to spend every possible minute with him. But soon Christy and her aunt are barely speaking, and it seems like all her friends are mad at her, too—including Todd! Is he hers or isn’t he? And why would God let things get so tangled?

"The Christy Miller series was actually born when a group of thirteen-year-olds challenged me to write a novel. I’d been questioning the content of their favorite books when they said, ’Why don’t you write a book for us?’ I told them no, I only wrote picture books. But they persisted: ’How hard could it be? We’ll even tell you what to write! We want a love story with teenagers at the beach.’ And there you go. Summer Promise first released seventeen years ago and is now translated into five languages. I continue to hear from readers all over the world, many girls saying that they gave their life to Christ after reading Summer Promise. I love that!"

▼▲
Robin Jones Gunn is the bestselling, award-winning author of sixty books with 2.75 million copies sold worldwide. She began writing novels for teens, including the Christy Miller series, after serving in full-time youth ministry for over twenty years with her husband, Ross. She has taught at writers’ conferences and been a guest speaker for a variety of groups in settings from Hawaii to Helsinki. Robin and Ross have been married for twenty-eight years and have a grown son and daughter. They live near Portland, Oregon.

▼▲
I'm the author/artist and I want to review Christy Miller Series: 3-in-1 Collection, Volume 1.
Back
Back