Skip to main content
CYBER WEEK SALE: Up to 88% off, thru 12/6. >
Christosis: Engaging Paul's Soteriology with His Patristic Interpreters
By: Ben C. Blackwell
Stock No: WW873912 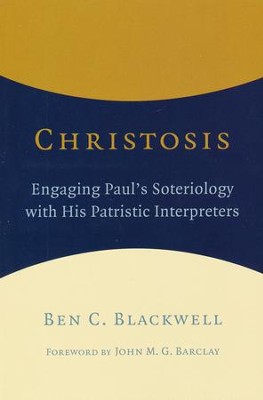 ▼▲
A groundbreaking study of salvation comparing the patristic view of deification with Paul's soteriology. Examining two major Greek interpreters---Irenaeus and Cyril of Alexandria---Blackwell clarifies what deification entails, analyzes Paul's views on salvation as expressed in Romans 8 and 2 Corinthians 3--5, and explores how believers embody Christ's life, death, suffering, and glory in the Spirit. 330 pages, softcover from Eerdmans.

▼▲
Amid increasing interaction between Eastern and Western theologians, several recent biblical interpreters have characterized Paul’s soteriology as theosis, or deification, harking back to patristic interpretations of Paul. In this book Ben C. Blackwell critically evaluates that interpretation as he explores the anthropological dimension of Paul’s soteriology.

Blackwell first examines two major Greek patristic interpreters of Paul — Irenaeus and Cyril of Alexandria — to clarify what deification entails and to determine which Pauline texts they used to support their soteriological constructions. The book then focuses on Paul’s soteriology expressed in Romans 8 and 2 Corinthians 3-5 (with excursuses on other passages) and explores how believers embody Christ’s death and life, his suffering and glory, through the Spirit. Blackwell concludes by comparing the patristic view of deification with Paul’s soteriology arising from the biblical texts, noting both substantial overlap and key differences.

▼▲
Scott Hahn
—Franciscan University of Steubenville
"This is a bold book. In a season when academics battle over 'new' and 'old' perspectives on Paul, Ben Blackwell dares to take up the ancient perspective—put forward by giants such as Irenaeus of Lyon and Cyril of Alexandria. These early interpreters took seriously Paul's insistence on life 'in Christ.' They spoke of divine adoption, filial deification—a salvation that is transformational—an ontological change that respects the Creator-creature distinction. Christosis is that rare work that succeeds as a work of exegesis and historical theology."

Todd D. Still
—Truett Seminary, Baylor University
"More than a comparative study or an interesting exercise in reception history, Blackwell's book challenges readers to contemplate more carefully what it might mean that 'he became what we are in order to make us what he is himself.' "

Edith M. Humphrey
—Pittsburgh Theological Seminary
"Here is one of those rare theses that prove themselves both mature and invaluable in method, substance, and analysis. Blackwell's well-considered philosophical grounding, illuminating analysis, judicious adaptation of previous typologies, clarifying charts, comprehensive knowledge of contemporary scholarship, and sensitivity to debates between East and West make for a compelling and exciting argument."

David B. Capes
—Houston Graduate School of Theology
"Ben Blackwell is leading a growing chorus of western scholars who showcase the folly of reading Paul without attending to the insights of his earliest interpreters. He takes a neglected feature of Paul's soteriology, namely, deification, and puts it center stage where it belongs. Christosis is carefully nuanced and thoroughly persuasive."

— Catholic Biblical Quarterly
"Clear and elegant. . . . Blackwell's skill at finding apt heuristic categories allows for his patient exegesis of Romans 8, 2 Corinthians 3–5, along with Colossians 2, Galatians 3–4, 1 Corinthians 15, and Philippians 2–3, to be both illuminating and straightforward."

▼▲
I'm the author/artist and I want to review Christosis: Engaging Paul's Soteriology with His Patristic Interpreters.
Back
Back