Skip to main content
HOURS LEFT! UP TO 76% OFF BIBLE SALE: Save on over 1,100 Bibles. >
Christobiography: Memories, History, and the Reliability of the Gospels
By: Craig S. Keener
Stock No: WW876751 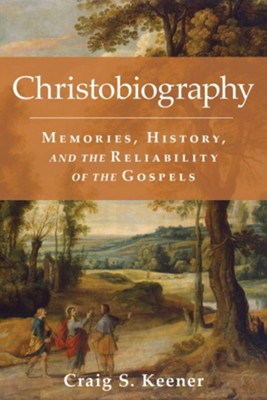 Christobiography: Memories, History, and the Reliability of the Gospels

The four canonical Gospels are ancient biographies, narratives of Jesus’s life. The authors of these Gospels were intentional in how they handled historical information and sources.

▼▲
Craig S. Keener is F. M. and Ada Thompson Professor of Biblical Studies at Asbury Theological Seminary. Several of his twenty-five books have won national or international awards. His other works include commentaries on Matthew, Romans, 1 & 2 Corinthians, Galatians, a two-volume commentary on John, and a four-volume commentary on Acts.

▼▲
— Richard Bauckham
"I have long thought that what we need is to be able to place the Gospels much more precisely within the wide spectrum of ancient biographies. Keener has mastered the literature, primary and secondary—as one would expect."

Markus Bockmuehl
— University of Oxford
"This is a welcome guide to some of the best recent scholarship on the biographical purpose and composition of the Gospels, taking due account of the impact of memory in their composition. Prof. Keener sensibly concludes that living memory played a meaningful and consolidating role in the formation of these rhetorically constructed but essentially historical narratives about Jesus. A thorough and reliable introduction to this vital yet complex subject!"

Alanna Nobbs
— Macquarie University
"This work displays extensive knowledge of the major classical texts from around the New Testament period. Keener uses these judiciously and critically, as an ancient historian would do for any primary source, showing awareness of genre and bias and using modern studies of memory and its impact on historiography. Thus he provides an integrated and convincing historical picture."

James H. Charlesworth
— Princeton Theological Seminary
"Less than two decades ago, New Testament experts concurred that no one can or will ever publish a biography of Jesus. Why? It is because former scholars concluded that the authors of the Gospels are all biased, even creating traditions not from history but from the proclamations about Jesus. Now, thanks to archaeological and historical studies, we know that the descriptions of some Galilean villages and Jerusalem in the Gospels prove that the Evangelists accurately described some installations; they knew what we did not formerly know. To claim that a biography must be objective reduces the inviting and informative biographies to a mere list of unrelated episodes that may masquerade as facts. We also now have hundreds of compositions from Jesus’s time that were either unknown to previous scholars or misinterpreted by them. The Gospels belong among the ancient biographies. Craig Keener’s study reflects the new data and perspectives and is a gift to many. Keener is certainly in the front ranks of experts on Jesus. The book is astoundingly well researched, balanced in judgment, and ideal for various classes."

Craig A. Evans
— Houston Baptist University
"Craig Keener’s sophisticated knowledge of the classical world is in evidence in his impressive Christobiography. He not only knows the sources; he asks of them the proper questions, such as what first-century readers expected of biographies. Keener rightly focuses on the biographies of the early Roman Empire. He also rightly takes into account the important fact that the New Testament Gospels were composed within living memory of their subject and that this tradition arose from the disciples of Jesus, who by definition were committed to learning their master’s teaching and recalling his deeds. Keener’s book makes a much-needed contribution to a very important topic."

David Aune
— University of Notre Dame
"Craig Keener argues convincingly that ancient readers of Greek and Latin biographies from the period of the early Roman Empire (e.g., Cornelius Nepos, Plutarch, Suetonius, and Tacitus) had the same expectation as those who read the Gospels, expecting them to preserve the gist of what their subjects had actually said and done. Along the way, Keener provides an up-to-date summary of modern memory studies. In the early Christian community, the eyewitnesses who provided data for inclusion in the Gospels were also disciples who were highly motivated to preserve the legacy of Jesus. Basically, this is a book that sheds light on the epistemology of historical Jesus research. Anyone seriously interested in the historical Jesus will find this book both rich and rewarding."

David P. Moessner
— Texas Christian University
"Keener’s ability to read both widely and deeply through an expansive swath of primary literature of the Greco-Roman world, to detect telling evidence and articulate those insights that transform conventional wisdom and reconfigure the terms of the debate, is, quite frankly, without parallel. Through new appropriations of ’memory studies,’ biographical history in the early empire, and an illuminating taxonomy of both Greek and Jewish biography, Keener makes an exceptional case that the narration of the story of Jesus in the four Gospels is a thoroughly mixed hybrid of biographical and historiographical concerns such that a new subset of literature emerges, the Christobiography. Keener’s opus now forms a new watershed in Gospel genre studies."

— James D. G. Dunn
"Christobiography is addressed to both scholars and students interested in Gospel and historical Jesus research and is, to say the least, a very impressive study. The Synoptic Gospels compare well with other ancient biographies as to the reliability of the information they provide. They told the same stories, but often without concern for details extraneous to their point. Not least of interest is the striking summary of the overlap between John and the Synoptics, showing that John is still a historical biography. There is a very helpful chapter on memory and the reliability of oral tradition in the context of Jesus’s ministry and his followers, given that it was understood as teaching. The strong and justified conclusion is that Jesus’s disciples would have learned and transmitted his teaching no less carefully than most other disciples the wisdom of their teachers. In short, the Gospels compare well with the other biographies of the time as to their historicity, and there is a strong historical probability that the Gospel memoirs have preserved the content and character of Jesus’s ministry and teaching. I cannot commend this careful and thorough study too highly."

▼▲
I'm the author/artist and I want to review Christobiography: Memories, History, and the Reliability of the Gospels.
Back
Back