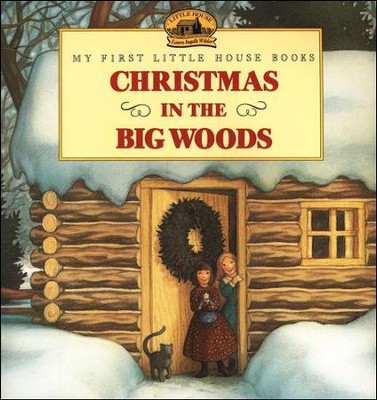 Christmas in the Big Woods, My First Little House Books

Product Close-up Visit the Little House on the Prairie Shop

▼▲
Christmas is coming, and Laura and Mary are helping Ma to get ready for a merry visit from the relatives in the Big Woods. Christmas Day brings lots of fun and surprises, including a very special gift for Laura.

Laura Ingalls Wilder's Little House books have been cherished by generations of readers. Now the youngest readers can share in her adventures in these very special picture books adapted from the beloved stories. Renie Graef's warm, color paintings, inspired by Garth Williams' classic Little House illustrations, bring Laura and her family lovingly to life. Recommended for ages 3 to 8.

Laura Ingalls Wilder (1867–1957) was born in a log cabin in the Wisconsin woods. With her family, she pioneered throughout America’s heartland during the 1870s and 1880s, finally settling in Dakota Territory. She married Almanzo Wilder in 1885; their only daughter, Rose, was born the following year. The Wilders moved to Rocky Ridge Farm at Mansfield, Missouri, in 1894, where they established a permanent home. After years of farming, Laura wrote the first of her beloved Little House books in 1932. The nine Little House books are international classics. Her writings live on into the twenty-first century as America’s quintessential pioneer story.

▼▲
I'm the author/artist and I want to review Christmas in the Big Woods, My First Little House Books.
Back
Back