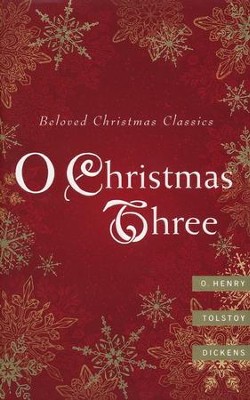 ▼▲
These heartwarming Christmas stories from three of the best known authors of the past century have all been gathered together in one volume! Inside the pages of O Christmas Three you'll find beloved author O. Henry's all-American tale, The Gift of the Magi, originally published in 1906; Leo Tolstoy's Russian folktale, Where Love Is, There God Is Also published in 1887; and two of Charles Dickens' little-known classics, Poor Travellers from 1854 and What Christmas Is As We Grow Older from 1851. Jacketed hardcover.

Heartwarming stories that recall Christmases past:

"One dollar and eighty-seven cents. That was all. And sixty cents of it was in pennies. Pennies saved one and two at a time by bulldozing the grocer and the vegetable man and the butcher until one’s cheeks burned with the silent imputation of parsimony that such close dealing implied. Three times Della counted it. One dollar and eighty-seven cents. And the next day would be Christmas&hellip;. She had been saving every penny she could for months, with this result. Twenty dollars a week doesn’t go far. Expenses had been greater than she had calculated. They always are. Only $1.87 to buy a present for Jim. Her Jim." – from the beginning of "The Gift of the Magi"

O.Henry was the pen name of William Sydney Porter, an American storyteller, born in Greensboro, North Carolina in 1862. Leo Tolstoy’s novels, such as War and Peace, are classics of the genre. 2010 marks the 100th anniversary of his death. Charles Dickens was the most popular storyteller of the nineteenth century. Throughout America, people would gather by the thousands around seaports and train stations when word was coming that a new installment of a Dickens’ book was about to arrive.

▼▲
I'm the author/artist and I want to review O Christmas Three: O. Henry, Tolstoy, and Dickens.
Back
×
Back
×