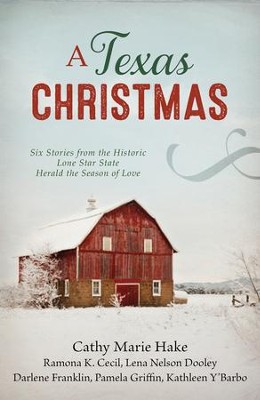 ▼▲
Spend Christmas in the Old West with six unconventional women who take on Texas-sized challenges—and unexpected romance. Bridget falls for a man opposed to her teaching Indian orphans. Polly is trying to hold her family together when her childhood love returns to town. Rugged rancher Charlsey is inexplicably attracted to a tenderfoot accountant. Vivian shuns marriage until meeting a nomadic photographer. Lacey’s cooking draws a quiet blacksmith out of his shell. Tracker Bessie Mae helps a ranger hunt down a villain.

RAMONA K. CECIL is a wife, mother, grandmother, freelance poet, and award-winning inspirational romance writer. Now empty nesters, she and her husband make their home in Indiana. A member of American Christian Fiction Writers and American Christian Fiction Writers Indiana Chapter, her work has won awards in a number of inspirational writing contests. Over eighty of her inspirational verses have been published on a wide array of items for the Christian gift market. She enjoys a speaking ministry, sharing her journey to publication while encouraging aspiring writers. When not writing, her hobbies include reading, gardening, and visiting places of historical interest.

Award-winning author Lena Nelson Dooley has had more than 800,000 copies of her books sold. She is a member of American Christian Fiction Writers and the local chapter, ACFW - DFW. She’s a member of Christian Authors’ Network and Gateway Church in Southlake, Texas.

She has been on both the CBA Bestseller list and several Amazon Bestseller lists. Her 2010 release Love Finds You in Golden, New Mexico, from Summerside Press, won the 2011 Will Rogers Medallion Award for excellence in publishing Western Fiction. Her next series, McKenna’s Daughters: Maggie’s Journey appeared on a reviewers Top Ten Books of 2011 list. It also won the 2012 Selah award for Historical Novel. The second, Mary’s Blessing, was a Selah Award finalist for Romance novel. Catherine’s Pursuit released in 2013. It was the winner of the NTRWA Carolyn Reader’s Choice contest, took second place in the CAN Golden Scroll Novel of the Year award, and won the Will Rogers Medallion bronze medallion. Her blog, A Christian Writer’s World, received the Readers Choice Blog of the Year Award from the Book Club Network.

In addition to her writing, Lena is a frequent speaker at women’s groups, writers groups, and at both regional and national conferences. She has spoken in six states and internationally. She is also one of the co-hosts of the Along Came a Writer blog radio show.

Award-winning author and speaker, Darlene Franklin recently returned to cowboy country—Oklahoma. The move was prompted by her desire to be close to her son’s family; her daughter, Jolene, has preceded her into glory. Darlene loves music, needlework, reading, and reality TV. Talia, a Lynx point Siamese cat, proudly claims Darlene as her person. Darlene has published several titles with Barbour Publishing.

PAMELA GRIFFIN lives in Texas with her family. She fully gave her life to Christ in 1988 after a rebellious young adulthood and owes the fact that she’s still alive today to an all-loving and forgiving God and to a mother who steadfastly prayed and had faith that God could bring her wayward daughter “home.” Pamela’s main goal in writing Christian romance is to help and encourage those who do know the Lord and to plant a seed of hope in those who don’t.

Cathy Marie Hake is a Southern California native. She met her two loves at church: Jesus and her husband, Christopher. An RN, she loved working in oncology as well as teaching Lamaze. Health issues forced her to retire, but God opened new possibilities with writing. Since their children have moved out and are married, Cathy and Chris dote on dogs they rescue from a local shelter. A sentimental pack rat, Cathy enjoys scrapbooking and collecting antiques. "I’m easily distracted during prayer, so I devote certain tasks and chores to specific requests or persons so I can keep faithful in my prayer life." Since her first book in 2000, she’s been on multiple best-seller and readers’ favorite lists.

Bestselling author Kathleen Y’Barbo is a Romantic Times Book of the Year winner as well as a multiple Carol Award and RITA nominee of more than fifty novels with almost two million copies in print in the US and abroad. A tenth-generation Texan, she has been nominated for a Career Achievement Award as well a Reader’s Choice Award and Book of the Year by Romantic Times magazine.

Kathleen is a paralegal, a proud military wife, and an expatriate Texan cheering on her beloved Texas Aggies from north of the Red River. Connect with her through social media at www.kathleenybarbo.com.

▼▲
I'm the author/artist and I want to review A Texas Christmas: Six Romances from the Historic Lone Star State Herald the Season of Love - eBook.
Back
Back