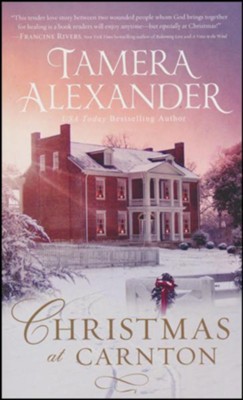 ▼▲
Recently widowed, Aletta Prescott struggles to hold life together for herself and her six-year-old son. With the bank threatening to evict them, she discovers an advertisement for the Women's Relief Society auction and applies for a position-only to discover it's been filled. Then a chance meeting with a wounded soldier offers another opportunity-and friendship. But can Aletta trust this man?

Captain Jake Winston, a revered Confederate sharpshooter, suffered a head wound at the Battle of Chickamauga. When doctors deliver their diagnosis, Jake fears losing not only his greatest skill but his very identity. As he heals, Jake is ordered to assist with a local Women's Relief Society auction. He respectfully objects. Kowtowing to a bunch of "crinolines" isn't his idea of soldiering. But orders are orders, and he soon discovers this group of ladies-one, in particular-is far more than he bargained for.

Set against the backdrop and history of the Carnton Plantation in Franklin, Tennessee, Christmas at Carnton is a story of hope renewed and faith restored at Christmas.

Tamera Alexander is a USA Today bestselling novelist whose works have been awarded and nominated for numerous industry-leading honors, including the Christy Award (two-time winner, seven-time finalist), the RITA Award (two-time winner, four-time finalist), the Carol Award, the Maggie Award, the Booksellers Best Award, and Library Journal's top distinction, among others. After seventeen years in Colorado, Tamera and her husband now reside in Nashville, Tennessee, where they live a short distance from Belmont Mansion and Belle Meade Plantation, the setting of Tamera’s two USA Today bestselling Southern series.

▼▲
'Alexander brings us yet another amazing read. If you have read her before, this novel does not disappoint...The reader will be sucked into this page-turner and experience the emotion that the characters are feeling. You won't want to miss this novella.'
'Christmas at Carnton is a tale of emotional highs and lows that allow readers to experience the joy, sorrow, and hopes of women in a southern town surrounded by war, as well as witnessing the daily struggles of men who must come to grip with life-altering wounds.'

▼▲
I'm the author/artist and I want to review Christmas at Carnton.
Back
×
Back
×