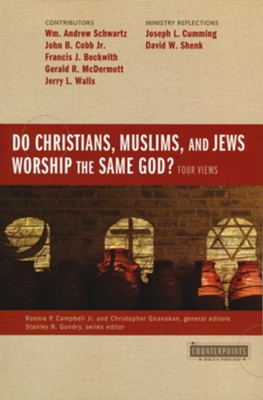 During a time of global conflict, the theological question of whether Muslims, Jews, and Christians worship the same God carries political baggage. Is the God of ISIS the same as the God of Israel? Do Sunni Muslims and Protestant Christians pray to the same Creator and Sustainer of the universe?

In this Counterpoints volume, edited by Ronnie P. Campbell, Jr., and Christopher Gnanakan, five leading scholars present the main religious perspectives on this question, demonstrating how to think carefully about an issue where opinions differ and confusion abounds. They examine related subtopics such as the difference between God being referentially the same and essentially the same, what "the same" means when referring to God, the significance of the Trinity in this discussion, whether religious inclusivism is inferred by certain understandings of God's sameness, and the appropriateness of interfaith worship.

The four main views, along with the scholars presenting them, are:

Gerald R. McDermott (PhD, University of Iowa) is the Anglican professor of divinity at Beeson Divinity School. McDermott has been the author, co-author, or editor of more than twenty books. An Anglican priest, he is teaching pastor at Christ the King Anglican Church, and is married to Jean. Together they have three sons and twelve grandchildren.

Wm. Andrew Schwartz (PhD, Claremont Graduate University) is executive director of the Center for Process Studies, co-founder and executive vice president of EcoCiv, and assistant professor of process and comparative theology at Claremont School of Theology. His recent work has been focused on comparative religious philosophies and the role of big ideas in the transition toward ecological civilization.

John B. Cobb, Jr. (PhD, University of Chicago) is an American theologian, philosopher, and environmentalist. One of the preeminent theologians in the world and the global leader of process theology, he is the author of more than fifty books. He is a co-founder of the Center for Process Studies and professor emeritus at Claremont School of Theology and Claremont Graduate University.

Francis J. Beckwith (PhD, Fordham University) is professor of philosophy and church-state studies and associate director of the graduate program in philosophy at Baylor University, where he also serves as a resident scholar in Baylor’s Institute for Studies of Religion. He has published widely in the areas of political philosophy, jurisprudence, applied ethics, philosophy of religion, and theology.

Jerry L. Walls (PhD, University of Notre Dame) is scholar in residence and professor of philosophy at Houston Baptist University. He is the author/editor of over twenty books and has published widely in philosophy of religion, ethics, philosophical theology, and apologetics.

David W. Shenk (PhD, New York University) is a global consultant for Eastern Mennonite Missions, where he serves on a team dedicated to Christian-Muslim relationships called Peacemakers Confessing Christ. He has written 20 books.

▼▲
I'm the author/artist and I want to review Do Christians, Muslims, and Jews Worship the Same God? Four Views.
Back
Back