Skip to main content
Christians Are Hate-Filled Hypocrites . . . and Other Lies You've Been Told
By: Bradley R. E. Wright
Stock No: WW207464 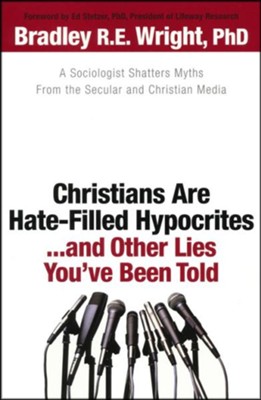 Christians Are Hate-Filled Hypocrites . . . and Other Lies You've Been Told

▼▲
Christians are used to the stories of the media that pronounce the slow death of the church in the west. Backed up by sociological statistics and other sources of information, they often make the claim that Christians are really no different from their secular counterparts. But are they correct?

In this short, but poignant book Christians Are Hate Filled Hypocrites and Other Lies You've Been Told University of Connecticut sociologist Bradley R.E. Wright shatters these reports and shows them to be nothing but myth. For example Wright shows that:

The media, of course, would have us believe none of this. But yet it is true, and it is a testimony to the lives and health of the western church. Nevertheless all of these statements is true, but we've been told the opposite time and time again. Why is the church being misled? And hat is the true state of Christianity in America today? Wright sifts through the relevant data and shatters popular myths in the process.

He reveals how Christians are doing when it comes to everything from marriage and morality to church growth and public perception. While not all the news is good, it turns there is a wealth of encouraging information that has been hidden from us. In this book you will get the truth behind the statistics you have been hearing and how the numbers are being manipulated, and discover what is really happening in American Christianity.

▼▲
According to the media, the church is rapidly shrinking, both in numbers and in effectiveness. But the good news is, much of the bad news is wrong. Sociologist Bradley R. E. Wright uncovers what's really happening in the church: evangelicals are more respected by secular culture now than they were ten years ago; divorce rates of Christians are lower than those who aren't affiliated with a religion; young evangelicals are active in the faith. Wright reveals to readers why and how statistics are distorted, and shows that God is still effectively working through his people today.

▼▲
Buy this book and read it carefully. Then buy one more and give it to your best friend and ask that person to do the same thing. I hope this book goes viral because this book shows that there's lots of good news when it comes to the condition of the church in the West. - Scot McKnight. Karl A. Olsson Professor in Religious Studies North Park University

▼▲
A sociologist at the University of Connecticut, Wright examines recent survey data on Christian evangelicals to see if they substantiate the often misguided and hyperbolic public perceptions of this faith group. Separating the wheat from the chaff, he explains how some poorly worded, ill-sampled statistics give the wrong impression of evangelicals and why people should avoid giving them credence. Though he often blames the media for gleefully reporting bad news about devout Christians, he doesnt spare evangelical polemicists such as Josh McDowell and Lee Strobel for their false exaggerations of evangelical shortcomings. His biggest target may be the pollster George Barna, whose surveys on Christianity have generated intense controversy. Wrights colloquial writing style gives this volume the feel of a folksy college lecture series. The abundant use of graphics adds to the impression the books genesis was cribbed from introductory sociology of religion classes. The conclusions drawn here--no surprise--are that the most committed Christians practice what they preach, performing better than the rest of the population on a host of social measures including divorce, domestic violence, sexual misconduct, crime, substance abuse, and everyday honesty. (July) Copyright 2010 Reed Business Information.

▼▲
I'm the author/artist and I want to review Christians Are Hate-Filled Hypocrites . . . and Other Lies You've Been Told.
Back
Back