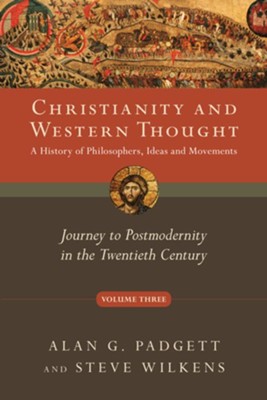 Christianity and Western Thought: Journey to Postmodernity in the Twentieth Century - eBook

▼▲
After 19 years, volume 3 in the monumental Christianity & Western Thought series is now available. The first volume in this series by renowned and dynamic scholar Colin Brown (also editor of the New International Dictionary of New Testament Theology), was widely received as an excellent textbook in philosophical and theological history. The second volume, by Alan Padgett and Steve Wilkens covered the revolutionary 19th century, and the latest volume, and the final in the series, covers the 20th century. On the hinges of the 19th Century's optimistic age of Enlightenment, the 20th Century, so argue Padgett and Wilkens, was a period of disillusionment. Humankind slowly and crushingly lost faith in reason, science, the human self, and in society. Two world wars, the advent of nuclear arms, and unprecedented human suffering destroyed belief in human ability to make the world better, and in any notion of metaphysical transcendence. Quite naturally this gave way to questions of meaning, reality, and identity eventually leading philosophers and theologians into an enigmatic, and seemingly directionless, postmodernism. Padgett & Wilkens address these developments in philosophy from a conservative Christian point of view offering summary descriptions, insightful analysis and critique. In this volume, the focus is mainly on philosophy, although major Christian theologians are also covered. Chapter topics include, Analytic Philosophy, German & French Existentialism, Dialectical Theology, Pragmatism, Analytic Philosophy, and the beginnings of Postmodernity. An excellent resource for professors of philosophy who want to orient their students to philosophy, this book is also accessible to anyone who wants to understand their faith against the broader intellectual currents of the West, and in particular the 20th Century.

▼▲
Colin Brown's Christianity Western Thought, Volume 1: From the Ancient World to the Age of Enlightenment was widely embraced as a text in philosophy and theology courses around the world. His project was continued with the same spirit, energy and design by Steve Wilkens and Alan Padgett in volume 2, which explores the main intellectual streams of the nineteenth century. This, the third and final volume, also by Wilkens and Padgett, examines philosophers, ideas and movements in the twentieth century and how they have influenced Christian thought. Students, pastors and thoughtful Christians will benefit from this volume which, when combined with the previous two, completes an authoritative history of Western thought since the birth of Christianity.

▼▲
Alan G. Padgett (DPhil, Oxford University) is professor of systematic theology at Luther Seminary in St. Paul, Minnesota, where he serves as the chair of the history and theology division. His books include (volumes 2 and 3), and . Previously, he was professor of theology and the philosophy of science at Azusa Pacific University, and he is an ordained minister in the United Methodist Church. Steve Wilkens (PhD, Fuller Theological Seminary) is professor of philosophy and ethics at Azusa Pacific University. His books include , , (volumes 2 and 3) and . He has also taught as an adjunct faculty member at Mount San Antonio College, Glendale Community College, Fuller Theological Seminary and Azusa Pacific University's C. P. Haggard Graduate School of Theology.

▼▲
I'm the author/artist and I want to review Christianity and Western Thought: Journey to Postmodernity in the Twentieth Century - eBook.
Back
Back