Skip to main content
NEW CYBER DEALS Save up to 90% thru 12/12  shop now >
Christianity: The First Three Thousand Years
By: Diarmaid MacCulloch
Stock No: WW118695 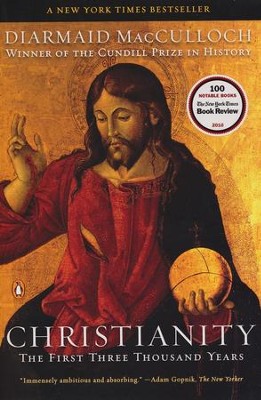 
A product of electrifying scholarship conveyed with commanding skill, Diarmaid MacCulloch's Christianity: The First Three Thousand Years goes back to the origins of the Hebrew Bible and encompasses Christianity's spread across the globe. It captures the major turning points in human history and fills in often neglected accounts of conversion and confrontation in Africa, Latin America and Asia.

It uncovers the roots of the faith that galvanized America, charting the surprising beliefs of the founding fathers, the rise of the Evangelical movement and of Pentecostalism, and the recent crisis within the Catholic Church. Bursting with original insights and a great pleasure to read, this monumental history will not soon be surpassed.

And yet, there is so much more to this story. MacCulloch also, and eloquently, narrates the events surrounding Apostolic Christianity, the doctrinal struggles during the era of the Patristics and Ecumenical Councils. He then moves into lesser-known and understood eras that include, the Great Schism between the Greek East and Latin West, the medieval era, and the tumultuous period of the Crusades.

He then moves back into the turbulent, superstitious, and conflicted world of the Protestant Reformation and the events and cataclysmic religious and social changes it would inspire. He then moves through the Enlightenment period, and into the events precipitating the awakenings in America and Great Britain that gave birth to the global Pentecostal phenomenon, and what we now know as Global Christianity.

Along the way, McCulloch introduces the reader to numerous monks, crusaders and mystics, theologians, social activists, popes, politicians, and many other characters that have defined the shape of the church. But he also includes the outsiders, heretics and renegade saints, all the while breathing life into the vibrant spectrum of Christianity's four major branches. Magnificent in its scope, Diarmaid MacCulloch's work is certain to be an unrivaled benchmark in the field of Christian history for years to come.

A product of electrifying scholarship conveyed with commanding skill, Diarmaid MacCulloch's Christianity goes back to the origins of the Hebrew Bible and encompasses the globe. It captures the major turning points in Catholic, Protestant, and Orthodox history and fills in often neglected accounts of conversion and confrontation in Africa, Latin America, and Asia. MacCulloch introduces us to monks and crusaders, heretics and reformers, popes and abolitionists, and discover Christianity's essential role in shaping human history and the intimate lives of men and women. And he uncovers the roots of the faith that galvanized America, charting the surprising beliefs of the founding fathers, the rise of the Evangelical movement and of Pentecostalism, and the recent crises within the Catholic Church. Bursting with original insights and a great pleasure to read, this monumental religious history will not soon be surpassed.

▼▲
Diarmaid MacCulloch is a fellow of St. Cross College, Oxford, and professor of the history of the church at Oxford University. His books include Suffolk and the Tudors, winner of the Royal Historical Society’s Whitfield Prize, and Thomas Cranmer: A Life, which won the Whitbread Biography Prize, the James Tait Black Prize, and the Duff Cooper Prize. A former Anglican deacon, he has presented many highly celebrated documentaries for television and radio, and was knighted in 2012 for his services to scholarship. He lives in Oxford, England.

▼▲
-Publishers Weekly
Where does Christianity begin? In Athens, Jerusalem, or Rome? How did the early creeds of the church develop and differentiate? What was the impact of the Reformation and the Catholic Counterreformation? How have vital Christian communities emerged in Asia, Africa, and India since the 18th century? Award-winning historian MacCulloch (The Reformation) attempts to answer these questions and many more in this elegantly written, magisterial history of Christianity. MacCulloch diligently traces the origins and development of Catholic, Orthodox, and Protestant Christianities, and he provides a more in-depth look at the development of Christianity in Asia and Africa than standard histories of Christianity. He offers sketches of Christian thinkers from Augustine and Luther to Desmond Tutu and Patriarch Bartholomew I. Three appendixes contain a list of popes, Orthodox patriarchs, and a collection of Christian texts. Assuming no previous knowledge on the part of readers about Christian traditions, MacCulloch traces in breathtaking detail the often contentious arguments within Christianity for the past 3,000 years. His monumental achievement will not soon be surpassed.

From Booklist
*Starred Review* MacCulloch signals the parameters of his prodigious scholarship when he brackets the Resurrection as a riddle no historian can resolve, then marvels at how belief in the Risen Lord has transformed ordinary men and women into martyrsand inquisitors. Despite his refusal to affirm the faiths founding miracle, MacCulloch demonstrates rare talent for probing the human dynamics of Christianitys long and complex evolution. Even when examining well-known episodessuch as the Church Fathers fight against Gnosticism or the stunning conversion of Constantinethis capacious narrative opens unexpected perspectives. Readers encounter, for instance, surprising connections between Christian doctrine, on the one hand, and ancient Greek philosophy interlaced with Roman politics on the other. As the chronicle fractures into Catholic, Orthodox, and Protestant strands, MacCulloch exposes unfamiliar but unmistakably human personalities who have shaped the worship of the divine. Readers meet, for instance, Gudit, a savagely anti-monastic Ethiopian queen, and Filofei, an irrepressibly ambitious Russian monk. Much closer to our time, we confront Christian enthusiasms that militarists harnessed in World War I, Christian hatreds that Nazis exploited in World War II. Concluding with the perplexities of evangelists facing an implacably secular world, MacCulloch leaves readers pondering a problematic religious future. A work of exceptional breadth and subtlety. --Bryce Christensen

“A landmark contribution . . . It is difficult to imagine a more comprehensive and surprisingly accessible volume than MacCulloch’s.”
—Jon Meacham, The New York Times Book Review

“A prodigious, thrilling, masterclass of a history book. MacCulloch is to be congratulated for his accessible handling of so much complex, difficult material.”
—John Cornwell, Financial Times

“A tour de force: it has enormous range, is gracefully and wittily written, and from page one holds the attention. Everyone who reads it will learn things they didn’t know.”
—Eamon Duffy, author of Saints and Sinners

“MacCulloch brings an insider’s wit to tracing the fate of official Christianity in an age of doubt, and to addressing modern surges of zeal, from Mormons to Pentecostals.”
—The Economist

“A triumphantly executed achievement. This book is a landmark in its field, astonishing in its range, compulsively readable, full of insight even for the most jaded professional and of illumination for the interested general reader. It will have few, if any, rivals in the English language.”
—Rowan Williams, Archbishop of Canterbury

“A well-informed and—bless the man—witty narrative guaranteed to please and at the same time displease every single reader, if hardly in identical measure. . . . The author’s prose style is fluent, well-judged, and wholly free of cant. . . . You will shut this large book with gratitude for a long and stimulating journey.”
—The Washington Times

“A tour de force . . . The great strength of the book is that it covers, in sufficient but not oppressive detail, huge areas of Christian history which are dealt with cursorily in traditional accounts of the subject and are unfamiliar to most English-speaking readers. . . . MacCulloch’s analysis of why Christianity has taken root in Korea but made such a hash in India is perceptive and his account of the nineteenth-century missions in Africa and the Pacific is first-rate and full of insight. . . . The most brilliant point of this remarkable book is its identification of the U.S. as the prime example of the kind of nation the reformers hoped to create.”
—Paul Johnson, The Spectator

▼▲
I'm the author/artist and I want to review Christianity: The First Three Thousand Years.
Back
Back