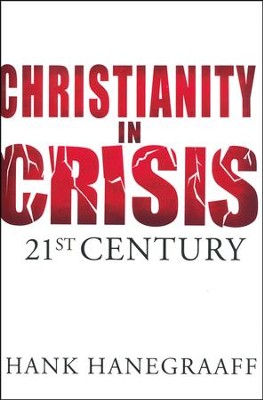 ▼▲
Nearly two decades ago Hank Hanegraaff's award-winning Christianity in Crisis alerted the world to the dangers of a cultic movement within Christianity that threatened to undermine the very foundation of biblical faith. But in the 21st century, there are new dangers--new teachers who threaten to do more damage than the last. Christianity in Crisis: 21st Century exposes darkness to light, pointing us back to a Christianity centered in Christ.

These are not obscure teachers that Hanegraaff unmasks. We know their names. We have seen their faces, sat in their churches, and heard them shamelessly preach and promote the false pretexts of a give-to-get gospel. They are virtual rock stars who command the attention of presidential candidates and media moguls. Through make-believe miracles, urban legends, counterfeit Christs, and twisted theological reasoning, they peddle an occult brand of metaphysics that continues to shipwreck the faith of millions around the globe:

"God cannot do anything in this earthly realm unless we give Him permission."

"Keep saying it—’I have equality with God’—talk yourself into it."

"The Jews were not rejecting Jesus as Messiah; it was Jesus who was refusing to be the Messiah to the Jews!"

"You create your own world the same way God creates His. He speaks, and things happen; you speak, and they happen."

Christianity in Crisis: 21st Century exposes darkness to light, pointing us back to a Christianity centered in Christ.

"Having lost the ability to think biblically, postmodern Christians are being transformed from cultural change agents and initiators into cultural conformists and imitators. Pop culture beckons, and postmodern Christians have taken the bait. As a result, the biblical model of faith has given way to an increasingly bizarre array of fads and formulas."

Hank Hanegraaff serves as president and chairman of the board of the North Carolina–based Christian Research Institute. He is also host of a nationally syndicated radio broadcast, which is heard daily across the United States and Canada—and around the world via the Internet at equip.org. Hank is the author of more than twenty books.

Widely regarded as one of the world’s leading Christian authors and apologists, Hank is deeply committed to equipping Christians to be so familiar with truth that when counterfeits loom on the horizon, they recognize them instantaneously. Through his live call-in broadcast, Hank answers questions on the basis of careful research and sound reasoning, and interviews today’s most significant leaders and thinkers.

Hank and his wife, Kathy, live in Charlotte, North Carolina, and are parents to twelve children.

▼▲
I'm the author/artist and I want to review Christianity in Crisis: 21st Century.
Back
Back