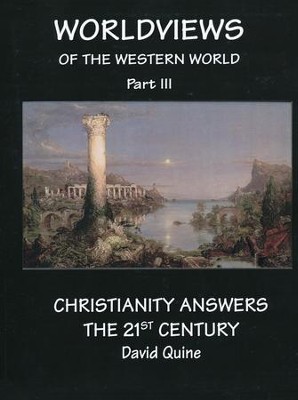 Christianity Answers the 21st Century by David Quine was initially published as Part IV in the "Worldviews of the Western World Series," and is now re-labeled as Part III/Year 3. This volume still follows The Grandeur of Christianity & the Revolutionary Age, Year 2 Syllabus in the Worldviews series.

Christianity Answers the 21st Century is an interdisciplinary study of Philosophy & Theology, Literature, Art, Music, Government, Economics, and Science. Pages of exercises are designed to accompany readings, audio, and video from outside sources, including "From Pandas & People", "The Old Man and the Sea", "How Should We Then Live?" and others. Students will read or watch the assignment, then answer questions, fill in charts, and complete exercises that will stretch their thinking and keep their minds engaged. The chosen topics (Evolution, Marxism, the Constitution, Culture, Economics & more) allow students to study and analyze the most significant ideas that have shaped the 21st century from the perspective of a biblical world view. The Syllabus includes a weekly teaching overview, study notes, commentaries, outlines, and short answer and essay questions. 698 pages, softcover. This consumable book is NOT reproducible.

▼▲
I'm the author/artist and I want to review Christianity Answers the 21st Century, Year 3 Syllabus: World Views of the Western World.
Back