Skip to main content
SPRING CYBER EVENT STARTS NOW: And it's a really BIG deal! Up to 88% off through 5/24>
Christianity and Liberalism, Revised
By: J. Gresham Machen
Stock No: WW864994 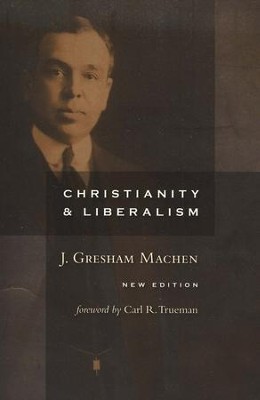 ▼▲
J. Greshem Machen's book Christianity and Liberalism has long been a classic defense of orthodox Christian faith against Liberalism. Published in 1923 at the height of the Liberal onslaught against orthodox faith, Machen establishes the traditional teaching of the church on Scripture, God, humanity, salvation, and ecclesiology, are not only defensible but preferable to those propounded by Liberals. It is important to keep in mind the Machen is not talking about modern political liberalism, but the religious liberalism many denominations and seminaries were accepting in the early 1900's. Named one of the top 100 books of the 20th century by Christianity Today, this work remains timely, relevant, and important.

▼▲
This classic defense of orthodox Christianity, written to counter the liberalism that arose in the early 1900s, establishes the importance of scriptural doctrine and contrasts the teachings of liberalism and orthodoxy on God and man, the Bible, Christ, salvation, and the church. J. Gresham Machen’s Christianity and Liberalism has remained relevant through the years ever since its original publication in 1923. It was named one of the top 100 books of the millennium by World magazine and one of the top 100 books of the twentieth century by Christianity Today. / “An admirable book. For its acumen, for its saliency, and for its wit, this cool and stringent defense of orthodox Protestantism is, I think, the best popular argument produced [in the controversy between Christianity and liberalism].” / — Walter Lippmann in A Preface to Morals / “It is my conviction that Machen’s book can still speak today. . . . Even for those who do not agree with his central thesis, Christianity and Liberalism can still be understood as representing one of the literary artifacts of a generation that had come to see liberalism as leading inexorably to a sentimentalized religion that had nothing to do with the God of the Bible or, indeed, with real life.” / — Carl R. Trueman (from the foreword) / Westminster Theological Seminary

▼▲
J. Gresham Machen (18811937) was professor of New Testament at Westminster Theological Seminary in Philadelphia. He was also the author of Christian Faith in the Modern World, What Is Faith? and The Origin of Pauls Religion.

▼▲
I'm the author/artist and I want to review Christianity and Liberalism, Revised.
Back
Back