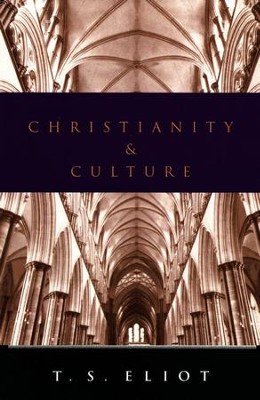 ▼▲
On of America's most prized essayists takes a poignant look at two major elements that shape society--religion and culture. Originally published as two separate essays, each explores the very foundations on which modern-day societies are built. In the first essay The Idea of a Christian Society, T.S. Eliot examines the undeniable link between religion, politics, and economy, suggesting that a real Christian society requires a direct criticism of political and economic systems.

In the second essay, Notes Towards the Definition of Culture, Eliot sets out to discover the true definition of "culture," a word whose misuse and ambiguity presents a danger to the legacy of the western world. Intellectually, Eliot was years ahead of his time, and these essays continue to be an invaluable tool for analyzing and understanding the nature of society.

▼▲
Two long essays: “The Idea of a Christian Society” on the direction of religious thought toward criticism of political and economic systems; and “Notes towards the Definition of Culture” on culture, its meaning, and the dangers threatening the legacy of the Western world.

▼▲
I'm the author/artist and I want to review Christianity and Culture, T.S. Eliot.
Back
×
Back
×